Three long days of tramping around Wembley had obviously taken its toll with many of the fans who sat down on the Monday evening for the biggest feast of country music ever assembled for one show. The enthusiasm was wilting as the evening progressed, their energy sapped by the two previous nights of star-studded entertainment. But it was the magical name of Merle Haggard that kept them glued to the hard, uncomfortable seats almost seven hours later to welcome the superstar of Country music.

Raymond Froggatt, the centre of controversy because he had been chosen to represent Britain at the Nashville International Fan Fair this June, proved his knockers to be wrong. He put in a creditable performance, and though his band sounded a little ‘messy,’ his self-penned songs came over strongly.

Unexpectedly, it was Pete Sayers who took to the stage next, backed up by the Kevin Henderson Band. He ran through a varied act—Two Little Boys, the humorous Pickin’ & Grinnin’ For The Beeb and the more serious Armstrong, plus his instrumental dexterity on Dobro and banjo. His crack about ‘The Cowboy Of The Year Show’ fell on deaf ears, but the field of Stetsons showed that Pete had come to the right place.

The first surprise of the evening came from Canadian Ronnie Prophet, who played with all the arrogant confidence of a man in total command of his act. His electric guitar work on Ghost Riders In The Sky was too gimmicky for my liking, and his impersonations didn’t seem to impress either and just as I was going to write him off, he redeemed himself with the hilarious tale of a frog’s love life. To describe it is impossible, to have risked such a thing at Wembley was suicidal, yet Mr. Prophet carried it off magnificently. He won a well-deserved encore and along with his impromptu return later in the evening, Ronnie Prophet must be set for a return to Britain.

The applause welcoming Tompall Glaser and his all-star studio band was deafening. The vocal sound returned from the stage was, at times, little more than a whisper. Throughout his all too brief act, Tompall sang with the throaty, hoarse tone that comes only with expensive and bad habits. Opening with It Never Crossed My Mind, the audience amazingly gave him more thunderous applause, as if cheering on a lame runner to the finishing point. Tompall stumbled onwards with the all-too-true Drinking Them Beers, an appalling T For Texas and a more than welcome Put Another Log On The Fire.

Wisely he left the stage, the audience vainly begging for more, but no way could his voice have got through another song. Following the interval we had the Marlboro Talent Competition Presentation, which was launched by The Mervyn Conn Wimbledon Dancers, a novel idea somewhat offset by our illustrious host losing his cool because the taped music was not cued in correctly. The girls, aged between four and nine years, showed virtually no nerves and went through the well-rehearsed routine beautifully.

A word now about the winning group, West Virginia, from Liverpool, who performed on a giant Wembley stage without a soundcheck or any rehearsal, and gave the audience a magnificent version of Rodney Crowell’s Rachel, and sounding better than some of the major American names no less. The Duffy Brothers deservedly won the solo/duo award and ran through the bluegrass classic Orange Blossom Special.

Larry Gatlin, Family and Friends opened the second part of the concert. An act which revealed the power, depth and variety of American country music, so often lost in the grind of Nashville produced records. They ran through Larry’s big hits, opening surprisingly with Broken Lady and including Love Is Just A Game, I Don’t Wanna Cry and Larry’s beautiful solo version of The Heart. The audience were so enamoured that they demanded and got an encore. Larry and the boys are neat and tight; a breath of fresh air through a scene which has become over-populated by people trying to get recognition as budding superstars.

The thing that trendies of a couple of years ago called ‘buzz’ is definitely in the air for Joe Ely. Seeing him and his band at Wembley, I was pleasantly surprised at how good they sounded and unpleasantly surprised at how lukewarm the reaction was. They made much of the contemporary country music sound a shallow fraud when they took to the stage and opened with I Had My Hopes Up High. More gems like She Never Spoke Spanish To Me, Boxcars and Because Of The Wind failed to penetrate the myopic minds of the pseudo cowboys and they left to just a smattering of warm applause.

It’s the Nashville conveyor belt that the fans favour and the sophisticated sound of Dottie West was more to the audience’s liking. With the Cross-Country Band providing the backing, Dottie whizzed through some of her old hits and even found time to include Love Is No Excuse, which she recorded with Jim Reeves some fifteen years ago and a creditable version of Tammy’s Stand By Your Man.

The Jolly Rogers took a full ten minutes to set up and was an inspired move to bring the crazy Ronnie Prophet back to fill in. Kenny Rogers’ act was similar to that of Dottie West—smooth, sophisticated, and appealing. All of the hits—Reuben James, Sweet Music Man, Ruby Don’t Take Your Love To Town and a singalong version of Lucille. Dottie returned to duet onWhen Two Worlds Collide, otherwise the best that can be said about Kenny Rogers is that he is a good, consummate performer and the Wembley crowd loved him.

After the International Country Music Awards it was time for Ireland’s Ray Lynam to take the stage. Again he proved the equal of many of the American acts with a polished version of Wolverton Mountain and a medley of songs dedicated to the people who had influenced him—George Jones, Buck Owens, Hank Williams, Glen Campbell and Elvis Presley.

Moe Bandy followed, backed by his own group, the Rodeo Clowns. He doesn’t have much of an act, but impressed with a strong ‘country’ sound and a handy collection of hit songs. He sings about drink, barrooms and rodeos in a style that is totally believable. His medley of Hank Williams’ songs was also exceptional. The audience loved it and invited him back for an encore of Here I Am Drunk Again.

Merle Haggard took to the stage to a tumultuous reception. And he lived up to that reception throughout his whole act. Beginning with Daddy Frank, the sound was messy, but once Bonnie Owens was relieved of the tambourine it settled down nicely. Musically, the Bakersfield superstar was excellent. He left nothing to chance and gave a rousing performance of songs from his vast repertoire.

His music could not be criticised, but his rapport with the audience was non-existent. Throughout his act Merle demonstrated the wide scope of his music. Backed by a nine-piece band including a horn section, he showed off his various influences with Jimmie Rodgers’ Mother, The Queen Of My Heart, Bob Wills’ Take Me Back To Tulsa, Lefty Frizzell’s Always Late and a great trio of fiddlers (including the Hag) whooping it up on Orange Blossom Special.

Unexpectedly he included his tribute song to Presley, From Gracelands To The Promised Land, and a beautiful version of his own The Farmer’s Daughter, which for me was the highlight of his act. The standing ovation at the end was certainly well-justified, even though there was nothing truly innovating. I felt that Merle could have achieved even more if he’d communicated with the audience; came across as a person, not a well-oiled jukebox pumping out his long line of hits.
But for thousands it was a dream come true and I guess that Merle sent them home more than happy. An experience I’m glad I didn’t miss! 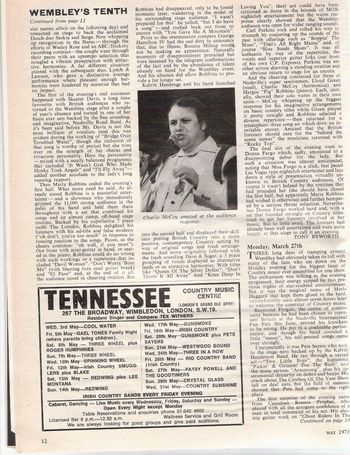 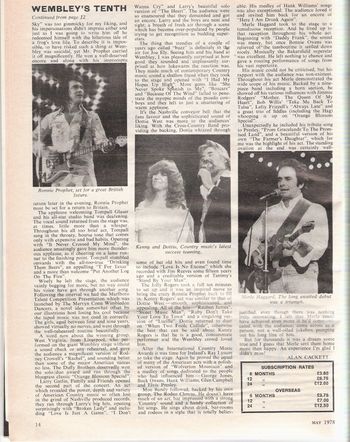