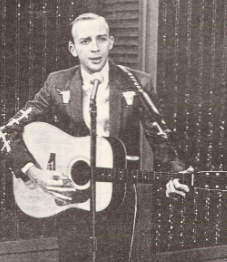 Whenever the great American country music stars come over to Britain they always enthuse about the friendliness and family spirit that exists between them, but sometimes I wonder if this is entirely true, or is the family spirit only there for those who are at the top? What about those singers who are not at the top, or those who have talent to be at the top, but are not accepted because their sound doesn’t conform to the legendary Nashville sound.

One of the best singers, that is ‘country’ singers, to have hit Nashville during the 1960s was Vernon Oxford. After a battle, many auditions, lots of promises, he finally secured a lucrative recording contract with RCA Victor, the biggest record company in Nashville. But poor Vernon, he couldn’t sell singles. Singles are the life-blood of country music. It is singles that the disc-jockeys play on the radio. You know the sort of disc, Ray Price makes them, beautiful strings, soaring voices, lush arrangements. They’re called country hits, they conform not only to the Nashville sound, but also the pop sound. That wasn’t Oxford’s style. He was reared in the Ozark Mountains. He had a voice that couldn’t be smoothed out with strings—he had to sing hillbilly music, it was the way he was made. No strings for Vernon. No sir! What he needed was fiddles, a banjo, a plucking mandolin and some good guitar picking. RCA tried to give it to him, but they messed it all up, they offered him drums to make the sound more heavy, gave him electric guitars instead of acoustic, but still the disc-jockeys wouldn’t play Vernon’s records.

That was back in 1966 and since then much of country music has become more countrified. Fiddles are back, but Vernon Oxford isn’t, but he should be. Back then he was produced by the best producer RCA has, Bob Ferguson. Ferguson has always been sympathetic to country music even though he knows that the product he produces must sell. Ferguson proved during the late 1960s that it was possible to sell genuine country records with fiddles and steel guitar—he did it with Porter Wagoner, Dolly Parton, George Hamilton IV and others. I believe that now in the 1970s he could do it with Vernon Oxford.

Vernon Oxford was born on June 8, 1941 near Rogers, a small township in Benton County, Arkansas, to Mr. & Mrs. Walter Vernon and was one of seven children. His childhood was spent in rural surroundings. His school was nothing more than a wooden shack. His leisure time was taken up with music, his father was a fine fiddler, and the whole family would join in during the evening singing and playing the old mountain songs. Just before Vernon reached his teens his family moved from the Ozarks to Wichita, Kansas. Here Vernon joined the local church choir and first began taking an interest in the guitar and fiddle. At first he became more expert on the fiddle and entered several local fiddle contests including the famous Cowtown contest and the Kansas State Championship. He then progressed to singing and formed his own group and played throughout the mid-west at clubs, honky-tonks and other small places of entertainment.

This eventually led to the move to Nashville and the usual round of record companies and music publishing firms. He tried RCA—was turned down. Called in at United Artists. The same response. At the time no one was interested in somebody who could sing real country music. He became acquainted with Harlan Howard, a successful Nashville writer who specialised in writing straight-forward country songs. Howard’s songs and Oxford’s voice were tailor-made for each other, what was needed was just the right song to appeal to one of the record companies. More audition tapes were made. Harlan Howard made it his personal responsibility to get Vernon Oxford started. He was knocked out by his natural voice and the great feeling he had for the music.

Eventually RCA were impressed with one of the audition tapes that Vernon Oxford had submitted, and in December, 1965 Vernon Oxford cut his first commercial session for RCA Victor. The result was a small hit with Harlan Howard’s Woman Let Me Sing You A Song, but unfortunately Vernon Oxford didn’t catch on, even though everyone raved about his great ‘country’ voice.

Most of his recordings were very country, and though he recorded several up-beat numbers, he was better on slow weepers with stand-outs being Touch Of God’s Hand, This Woman Is Mine, Forgetfullness For Sale and Field of Flowers. Though he signed a five-year contract with RCA Victor in 1965, they only released seven singles and one album, all of which are sadly deleted. After leaving Victor  he signed with the Stop label, but again success eluded him, it seems that nowadays you can be too country, even for Nashville.

In 1971 a movement was started to persuade RCA Victor to release all of Vernon Oxford’s material that he recorded, this included seventeen titles previously released and eight titles that have never been released. After an almost fruitless task, RCA have at last agreed to release all of Vernon Oxford’s material on a double COUNTRY MUSIC MAKERS album. If you like natural country music, without all the modern Nashville trimming, take my advice, save up your pennies and purchase this album—I’ve a feeling it won’t be on the market for too long, and it may well be your last chance to hear the great country style of Vernon Oxford, who without gaining any lasting success, is already heading for obscurity. 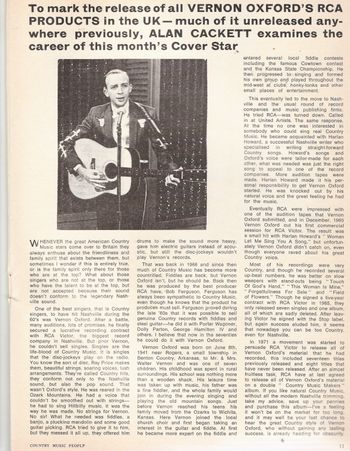