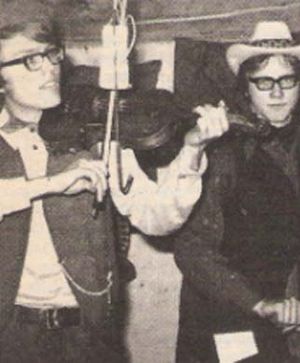 They say that country music is international, and I've heard from country music fans from many different countries, but undoubtedly the most dedicated fans must be those from Czechoslovakia. Until last year not a single country disc by an American artist had ever been issued in Czechoslovakia, yet the country has a thriving country music scene, that really deserves investigating.

A form of country music has always been popular in Czechoslovakia, going back to the early 1930s when the singing cowboy first appeared on the cinema screen. A type of 'western' film was first made in Czechoslovakia, following the success of film idols like Gene Autry, Roy Rogers and Ken Maynard. These were built around the open plains of the country, and so began the formation of the Czech 'Osadas'. The romance of the West connected with adventure, freedom and open air life really influenced the Czech people, and so-called 'tramps' became commonplace. These tramps were nothing like the bums of the 1930s, nor the tramps of today, but people who voluntarily joined organised trips at weekends to go out into the country and be free living with nature. These tramps are known as 'Osadas', and they have organised groups. Evenings were usually spent at camp-fires and romantic tramp songs were the main entertainment.

Many of these 'tramp' songs were recorded before World War II, and some have been reissued on LPs or newly recorded by today's 'tramp' groups. Although the tramp songs should not be considered country music, there are many things that tie the two musical forms together—simple melody and arrangement, with story-type lyrics, and the instrumentation of guitars, fiddles, harmonica. The main importance of the tramp songs on the development of country music in Czechoslovakia, is that their earlier popularity paved the way for the similar sounding American country music.

While the tramps with their songs prepared the way for country music, it was Radio AFN with its country programmes like Hillbilly Jamboree and Stickbuddy Jamboree which really kindled the flame in Czechoslovakia. The main reason for its popularity appears to be the strange blend of steel guitars, 5-string banjos and fiddles plus the names of the artists—The Drifting Cowboys, Rainbow Ranch Boys, Hank Snow, Hank Williams. To the Czech people they sounded just like the fairy tale personalities from the popular western films of pre-war.

The Osadas organisations were the main body that were interested in country music, and the members would spend hours every evening to tune their radios in to the AFN. Soon the tramps began to learn country songs they heard. They had no music, and no idea what the strange instruments were that they heard on the radio, but by perseverance and many hours of practice the country music songs were soon beginning to claim more time round the campfires than the traditional tramp songs.
The biggest major help to the Czech country music lovers was in the early 1960s when Pete Seeger toured the country with his five-string banjo and twelve-string guitar. This was the first time that many of the people had seen such instruments, but within months many similar instruments turned up in local country groups—most were made by the members of the groups because the strange instruments were not readily available. Soon interest in country music was really booming helped along in 1965 by the first country music programme on radio—Book of Country Music. That programme was hosted by Miroslav Cerny, a real pioneer of country music in Czechoslovakia, and was on the air every week for half-an-hour. With the help of American records which were kindly donated by artists and record companies in the States, for the first time the Czech people were actually able to hear American country music—but still there were no records released.

Soon more country groups were formed like The Greenhorns, The Bluegrass Hoppers, The Rangers, Jiri Brabec and Country Beat and many others. To begin with they had to learn all of the country songs from the radio, with no musical sheets being available—they usually translated the songs into their own language, although a few groups like Country Beat actually use the English language version on their recordings, and have become the most popular group in Czechoslovakia. The first country recordings to become available were by the Greenhorns with Abilene and Before I Met You released in 1968. The following year saw Country Beat top the national pop chart with A Dear John Letter, and country music had at last got a foothold in Czechoslovakia.

Live shows by the popular groups became really popular—The Rangers began a weekly club in Praha in 1967, and this club is still the most popular country music club in Czechoslovakia drawing over 800 people every week. The latest thing in the country music circle is Country Music Discotheque—this enables the Czech people to hear the current American hits much sooner than before, and more regularly, but it has certainly not replaced the live groups.

The popularity of country music has really grown in recent years and in 1969 when the first Porta Festival was held in Praha, over 3,500 people turned up, but last year this number had grown to almost 10,000. But it is in the clubs that country music really thrives in Czechoslovakia. These are very much like an English pub or an old style western saloon, with several bars and the country groups perform on a raised platform. Because most of the groups play traditional stringed instruments amplifiers and microphones are not in evidence. The musical accomplishments of the groups is really outstanding.