The McCarters - Whatever Happened To.....

With hits like Up And Gone and The Gift, they brought a sweet mountain sound to mainstream Nashville in the late 1980s

The McCarters, a traditional sounding trio from Dolly Parton country, Sevierville, in the Tennessee Smoky Mountains, brought refreshing mountain harmonies to mainstream country for an all-too brief period in the late 1980s. Jennifer McCarter and her younger twin sisters Lisa and Teresa scored Top 10 country hits with Timeless And True Love, The Gift and Up And Gone during 1988 and 1989, then suddenly disappeared without trace. 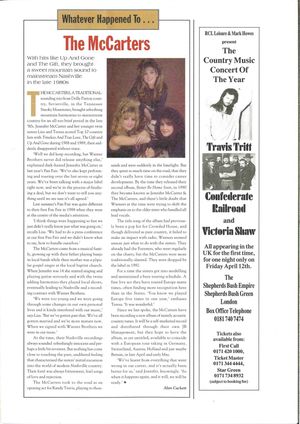 “Well we did keep recording, but Warner Brothers never did release anything else,” explained dark-haired Jennifer McCarter at last year's Fan Fair. “We’ve also kept performing and touring over the last seven or eight years. We’ve been talking with a major label right now, and we’re in the process of finalising a deal, but we don’t want to tell you anything until we are sure it’s all agreed.”

Last summer’s Fan Fair was quite different to their first Fan Fair in 1988, when they were at the centre of the media’s attention.

“I think things were happening so fast we just didn’t really know just what was going on,” recalls Lisa. “We had to do a press conference at our first Fan Fair and we didn’t know what to say, how to handle ourselves.”

The McCarters came from a musical family, growing up with their father playing banjo in local bands while their mother was a popular gospel singer at the local Baptist church. When Jennifer was 14, she started singing and playing guitar seriously and with the twins adding harmonies they played local shows, eventually leading to Nashville and a recording contract with Warner Brothers.

“We were too young and we were going through some changes in our own personal lives and it kinda interfered with our music,” says Lisa. “But we’ve gotten past that. We’ve all gotten married and we’re more mature now. When we signed with Warner Brothers we were in our teens.”

At the time, their Nashville recordings always sounded refreshingly innocent and perhaps a little bit reverent. But nothing has come close to touching the pure, undiluted feeling that characterised the sisters’ initial excursion into the world of modern Nashville country. Their forté was always bittersweet, frail songs of love and rejection.

The McCarters rook to the road as an opening act for Randy Travis, playing to thousands and were suddenly in the limelight. But they spent so much time on the road, that they didn’t really have time to consider career development. By the time they released their second album, BETTER BE HOME SOON, in 1990 they became known as Jennifer McCarter & The McCarters, and there’s little doubt that Warners at the time were trying to shift the emphasis on to the older sister, who handled all lead vocals.

The title song of the album had previously been a pop hit for Crowded House, and though delivered as pure country, it failed to make an impact with radio. Warners seemed unsure just what to do with the sisters. They already had the Foresters, who were regularly on the charts, but the McCarters were more traditionally-slanted. They were dropped by the label in 1992.

For a time the sisters got into modelling and maintained a busy touring schedule. A fine live act, they have toured Europe many times, often finding more recognition here than in the States. “You know we played Europe five times in one year,” enthuses Teresa. “It was wonderful.”

Since we last spoke, the McCarters have been recording a new album of mainly acoustic country tunes. It will be a self-marketed record and distributed through their own JB Management, but they hope to have the album, as yet untitled, available to coincide with a European tour taking in Germany, Switzerland, Austria, Holland and just maybe Britain, in late April and early May.

“We've learnt from everything that went wrong in our career, and it's actually been better for us,” said Jennifer, knowingly. “So when it happens again, and it will, we will be ready.'