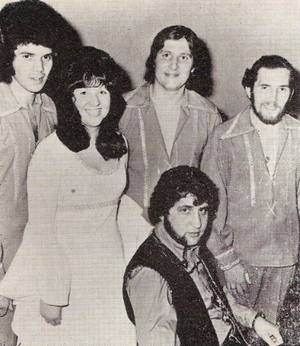 The standard of country groups in Britain has improved greatly over the last few years. Thinking back to the mid-1960s when most groups were suitably termed ‘amateurs,’ having only a very basic musical knowledge and many being unable to recreate that same magical sound that they were all obviously striving for, I suppose we should be grateful for the current scene. But so often when I hear a group today I have grave misgivings. Now that groups have a high musical standard to maintain, I begin to look for a little originality.

For many groups though, their material and basic style is highly derivative of the American stars to the point of inducing a state of near-boredom to the unfortunate listener. Their music has as much originality as a rose garden in suburbia and a darn sight less interest.

The same old Johnny Cash, Merle Haggard and Charley Pride tunes droned out night after night by even the most competent groups can become rather an unpalatable meal even for the most dedicated of country fans.

Yet most fans accept the situation without a murmur, even greeting the same old tired songs with enthusiastic applause and becoming rather nasty towards any group who dares not to play Folsom Prison Blues for them. A group that does show a little originality will often find a small pocket of dedicated followers, but the mass of country fans who frequent the clubs and pubs are rather indifferent to change and the variety of material they are offered.

A group that is beginning to break down the British country fans apathy is The Kelvin Henderson Country Band. Hailing from Bristol, the band is an intricate blend of talented musicians who firmly believe in the validity of country music. 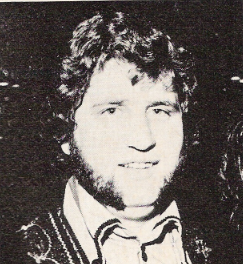 Kelvin Henderson was born some twenty-seven years ago in Bristol. His initial interest in music was inspired by his elder brother who would play folk and blues records by people like Huddie Leadbetter, Woody Guthrie and Ramblin’ Jack Elliott. Although Kelvin, only eleven or twelve at the time, didn’t really understand the lyrics of the songs, the natural and deep-felt feeling these singers were conveying meant a lot to him.

Through the initial interest in folk and blues he became acquainted with country music in a natural musical progression. He cites the famous Newport Jazz Festival albums of the late 1950s as being his first recollection of hearing any true American country music. Kelvin recalls vividly being captivated by Earl Scruggs banjo work and the simple, but basic emotions being expressed touched him.

From this beginning evolved a keen interest in country music, more with the traditional forms than the modern Nashville style. He began his own musical career as a soloist playing folk clubs for several years, being able to mix American country music and folk music, with many of the other folk buffs not recognising any difference in the musical forms.

Around eight or nine years ago he teamed up with Dave Gould, a five-string banjo player, and became more involved in country music. A few months in Ireland in 1966 led to work with The Cotton Mill Boys, and helped to inject new ideas into the group that eventually resulted in them having a string of big country hits in Ireland’s pop charts.
When explaining about his experiences in Ireland, Kelvin pointed out that when he was working over there, country music was played by the large showbands. In order for these bands to survive, it was necessary to dilute the country music with pop songs and use of brass to give the bands a more all-round sound. At the time Kelvin joined The Cotton Mill Boys, they were very much in the showband image. When he formed a splinter band a few months later, more on lines of the British country groups, the original Cotton Mill Boys decided to pursue the small group line-up, and it was in this form that they chalked up their string of chart successes.

At the end of 1966, Kelvin returned to his home in Bristol and prepared for a short working holiday in Europe. His plan was to tour around using his guitar and entertaining experience as a means for earning money to live on. He soon found himself in Paris where he obtained a stable job in a folky nightclub. Building up his funds, he bummed eastwards across Europe, through Belgium to Amsterdam where he remained for several months. It was in this Dutch city that he met his Swedish-born wife, which naturally led him north to Sweden.

With his wife he settled in Sweden and set about forming a country band consisting of Swedish musicians. The band created a favourable impression across the country and while there he recorded two albums with the band. The first album sold exceptionally well, which prompted the people of Polydor to persuade Kelvin to record the second just a few days prior to returning to Britain.

His return to Britain after more than two gruelling years in Sweden was due mainly to the heavy travelling schedule the group had to maintain. Country music is very popular in Sweden, but the country is barren and wild, towns being many miles apart, and often the group would need to travel two or three hundred miles between each gig, seven days a week, to make a reasonable living. I have the impression that Kelvin really enjoyed his stay in Sweden. He quotes that the audiences always listened intently to the band, were keenly interested in the music and this partly compensated for the heavy travelling he had to endure.

He doesn’t always feel the same way about some of the English country fans. At some venues he has played, he has had difficulty overcoming the boozy, noisy audiences, many who believe themselves to be country fans, but in fact are just out for a good beer up on a Saturday night, the music and lyrics being quite unimportant. He often feels quite disgusted when performing a song with tender lyrics telling rather a sad story and he knows it’s all falling on death ears.

The Kelvin Henderson Band that now tours Britain was formed three years ago, and though there have been the occasional personnel changes, their three years playing together have held the band in good stead. The interplay between the band members is tight without ever restricting their spontaneity. Their choice of material is versatile and well-paced. 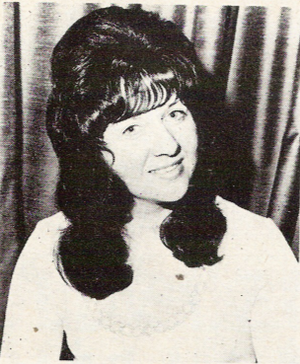 Kelvin’s old friend Dave Gould doubles on bass and banjo, Stewart Barnes plays the fluid lead guitar and Alan Holmes, the newest member, is on drums. On some dates the group has Yorkshire lass, Jeannie Denver along as a special guest vocalist. Unlike many country groups who employ a girl singer, Kelvin Henderson has been wise in his choice. Jeannie has been singing professionally for several years, and it shows in her stage presence and easy way with an audience. Another advantage is that she is not a squawking, pseudo-American chick trying to outdo the Tennessee mountain twang of her American counterparts. Jeannie possesses a smooth voice, plenty of emotion and a vocal range that is wide and pleasing to hear.

Recently, the band have been backing Slim Whitman on his British tour. This is the second time that they have backed a major American singer touring this country—in April they played second fiddle to Jimmy Payne, and will be doing the same again in December.

In the summer the band’s first album was released, and though they were a little unwise in trying to cover too great a cross-section of country in one album, I found it an enjoyable release. Any British group that attempts to mix Charlie Poole’s Didn’t He Ramble with Waylon Jennings’ Ladies Love Outlaws is asking for trouble, but this group has the talent to carry it off. The band’s special gift is the ability to assemble material from many different sources and then mould it all together into their own style while still retaining the diversity of sound for which they are continually striving for. Togetherness is a much-abused word, but it accurately described Kelvin Henderson and his Country Band in their musical approach throughout this album. Henderson’s voice is deep and rich with a warmth that puts the listener into a comfortable groove. The guitar work is very strong, especially on Kristofferson’s The Pilgrim—Chapter 33, with an exceptional vocal from Henderson. Other songs included range from Haggard’s Daddy Frank, The Guitar Man, Joan Baez’s Prison Trilogy, Jerry Reed’s Fine On My Mind to Tom T. Hall’s often underrated Kentucky In The Morning.

Kelvin Henderson, with his rich controlled voice, deserves success on the British country scene. He has a band that produces country music at its highest level. They can be soft and melodic, loud but tasteful. Most important though is the diversity of material that they perform. They might basically be a modern band, but they can easily throw in a little bluegrass, a few old traditional songs and contemporary material, and everything they do has that distinctive touch that allows the band to stand out from the rest of the pack. 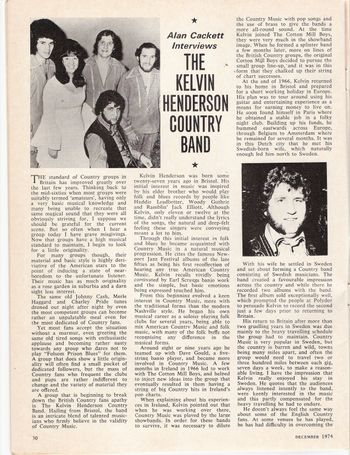 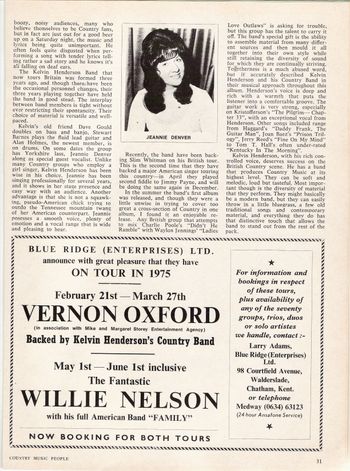