The Brothers Comatose - Turning Up The Ground 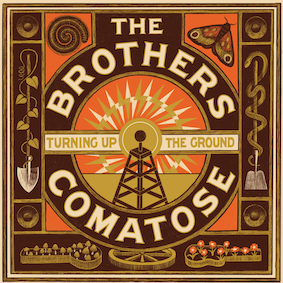 The Brothers Comatose is a five-piece California-based bluegrass-styled string-band. Few genres have clung so tightly to their traditions as bluegrass. So, it’s not surprising that, like a stereotypical preacher’s kid, young bluegrass artists have shown some of the most radical rebellion, from Nitty Gritty Dirt Band to New Grass Revival to Nickel Creek. Everything that this outfit does is decidedly and intentionally modern. Though they follow the model of the bluegrass ensemble, as far as the instrumentation is concerned, their music is seasoned for a more varied and contemporary, urban taste. Determined to colour outside the lines, taking as much inspiration from the Grateful Dead and Merle Haggard as from Bill Monroe and Earl Scruggs, the Brothers Comatose have constantly found new ways to spin old traditions. While their relationship to bluegrass is ensured through their prodigious use of banjo, mandolin, fiddle, acoustic guitar, upright bass and high lonesome harmonies, it’s also evident that the group follows a more mainstream mantra by including elements of rockabilly, folk, country-rock and pop overtones into their overall sound and style.

This is an album that pushes limits. Many bands claim to talk about working with a broad musical palette, but the Brothers Comatose genuinely walks the walk. A lively set way above par, it’s also an immensely listenable album, a fully realised emergence of the band’s true power in crafting edgy, eclectic songs. They whip tension like pros, nail their targets to the wall and come off with that peel paint while getting stuck solid in your head for days. The hand-clapping opener Working For Somebody Else upholds the highest standard in harmony-drenched cool-vibes country rock. They veer closer to bluegrass with Too Many Places. Ben Morrison’s warm baritone possesses an edgy yet still agreeable demeanor, a voice that blends authority and empathy in equal proportions in this delightful song of wanderlust. This fun-loving quintet threads the needle between old-school country and soft-rock ear candy, with big hooks and harmonies. Hole In My Pocket is a snappy, fiddle-driven rockabilly number, Gone, Gone, Gone has a nifty toe-tapping melody with a driving roller-rink feel and is a vintage blend of bluegrass-country that tells of a man drifting through life realising that he really doesn’t have a clue. The frenetic Steel Driver is like a torrential spring shower, the cascading notes pouring out of Philip Brezina’s fiddle, Ben Morrison’s guitar, Alex Morrison’s banjo, Greg Fleischut’s mandolin all underpinned by Steve Height’s rock-solid bass that surround Ben’s frantic vocals and refresh and renew.

That Shit Ain’t Funny exposes the darker side of the band. A break-up song with mournful fiddle and a sad-edged banjo adding to the overall vocal pathos with rough edges smoothed and backwoods accents removed. Eighteen Years, the closing track, is a pop-flavoured ballad with meditative, braided, hushed, and captivating washes of sound. It solidifies the group’s unerring knack for sumptuous melodies swathed in hazy, fiddle-tones and haloed by Ben’s opiated, sighing vocals.