The story of Tammy Wynette has been told and retold many times before in the pages of Country Music People, so this time I would like to deal explicitly with Tammy’s recordings and their relationship with the American way of life.

Basically country music is a social commentary on the middle-class American people and is too often misunderstood by the British public. That is why the music is scorned by the people who run the music business. They do not understand the music, cannot relate to it, so they try and ignore it, hoping that eventually it will go back to the hills where it came from.

Tammy Wynette is just one of the many Nashville singers who has suffered at the hands of those in positions of power in the British music industry. Most are still not aware yet of the importance of her recordings—Tammy is one of those singers who in her material is consistently mirroring the problems of the young married woman.
Twice divorced, married very young and a stormy personal life gives her an insight which she works into her material quite brilliantly. She chooses her songs because they reflect her inner loneliness of a woman who has been kicked down and treated badly in love, yet through it all, she believes that Mr. Right will come along and sweep her off her feet.

Jimmy Payne’s I Did My Best (To Fall In Love Last Night) is typical of this plea from a beautiful young woman needing a man to fend for her. It’s fantasy and dreamlike, the way a lot of women in their semi-detached, suburban homes feel, either trapped with the wrong man or looking for a better one to come along. She is an interpreter, and as such brings a unique musical personality to what she does.

Tammy Wynette’s real beginning as a Nashville star was only nine year ago when she left her husband and job as a beauty operator and part-time singer behind in Birmingham, Alabama and headed for Nashville with three children tied to her apron strings.

Times were hard for a few months, but an audition for Billy Sherrill led to the most successful producer/artist relationship in country music. Her first recording for the Epic label, Apartment No. 9 was an instant hit and the start of an unbeaten run of top selling singles, topped by the phenomenal Stand By Your Man which won a gold disc in 1968 and finally made the British charts last year.

To most people it was just another pretty country tune, but to those who knew better, a classic country hit. The song and the arrangement were perhaps, pop, Tammy’s voice was not—nasal, powerful, controlled and individual. Sherrill’s production clean and sparse for the verses, a pause, then right into the chorus and a hook that tears your heart out. It was a formula that Sherrill masterminded, and every record that Tammy makes maintains that same format.

What you cannot knock is success, and Sherrill and Wynette have been successful. Of course it’s not real, but as stylists they are superb. On everything they do, one emotion stands out: sadness. They have the ability to take family relations and re-work them into classic songs. Everything fits perfectly, Tammy’s husky, delayed-action voice, the beautifully pitched production, but most of all the songs, to create three minutes of intensely felt desperation.

You’ll like Tammy Wynette if you like sad, sweet songs about lost love, found love, fragile and hopeless. She misses her man; the despair of broken relationships, the joy of new ones. She’s company on long, cold winter nights. She might even make you shed a few tears.

It has been said that Tammy Wynette is manipulated, she’s held in chains by Sherrill who created and moulded her career, but one thing worth remembering is that several of her biggest hits like Another Lonely Night, Stand By Your Man and Take Me Home And Love Me have been penned by the singer.

Tammy’s voice has matured since the recording of Stand By Your Man. During the past few years she has produced a series of albums which can only be regarded as classics. Two that stand out in my mind are WOMAN TO WOMAN and I STILL BELIEVE IN FAIRYTALES. Sad chilling country albums with whining steel guitar carrying you further into the depths of despair. When carried by a talent like Tammy Wynette, it will paradoxically make you feel good afterwards.

They are both in a way concept albums built around simple love affairs, usually ones that have ended. Her own song, I’m Not A Has-Been (I Just Never Was) is a brilliant piece of writing. Simple, but filled with so much honest emotion. The most ironic song that Tammy has written lately is The Bottle. It spotlights the futility of a woman married to a man who is hooked on drink.

An obvious dig at her ex-husband George Jones, it is a song that all too many battered wives can so easily relate to. And that for me is what country music is all about, realism glossed over just a little with superior musicianship and production.

Tammy Wynette is the epitome of everything that makes modern country music so good. True it might sound all a bit phoney and contrived as you sit in your comfortable armchair in South London without a care in the world, but throughout her recordings Tammy Wynette—The First Lady of Country Music—spotlights the good and the bad side of being a woman in the largest country in the Western World. 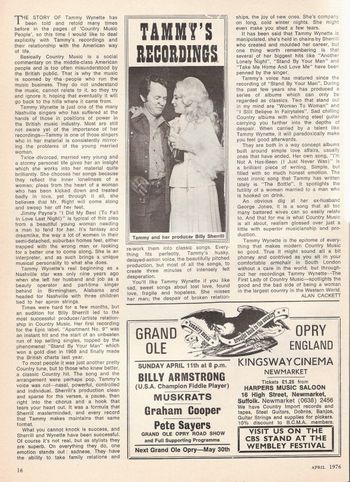