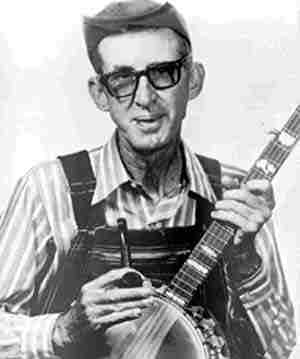 Stringbean, best known as a country music comedian, was also an outstanding banjo player in the old-timey style of Uncle Dave Macon. Though a long-time member of The Grand Ole Opry, he won even more fame through his appearances on the television series Hee Haw, in the late 1960s and early 1970s. One of the most colourful characters in country music, he successfully kept the banjo alive in country music at a time when the instrument almost became extinct, until it was picked up again by bluegrass musicians during the 1950s. Also known as the ‘Kentucky Wonder, David ‘Stringbean’ Akeman was born on June 17, 1916 in Annville, a small hamlet in Jackson County, Kentucky. The son of a fine banjo player, his first instrument was an old shoebox rigged up with some of his mother’s sewing thread. By the time he was twelve-years-old he had his own brand new banjo and was playing with his father and other relatives at local barn dances. After completing his schooling, work was hard to come by. He joined a Civilian Conservation Corps camp, where he built roads and planted trees. He entered a few local talent contests and performed with various local string bands around Lexington, Kentucky, including a six-year stint with Cy Rogers’ Lonesome Pine Fiddlers on radio station WLAP. In 1942 he was hired by Bill Monroe, and stayed for the next three years on the road and also made his recording debut on many of Monroe’s Columbia sessions. It was at this time that he adopted his comical act including his trademark ‘short pants’ costume, which he had probably adapted from seeing another local hillbilly performer. He teamed up with Willie Egbert Westbrook as the comedy duo String Beans and Cousin Wilbur. He left Monroe in 1945 and began a partnership with Lew Childre. By this time he had become a regular on The Grand Ole Opry and developed a close relationship with fellow comedian and banjoist Grandpa Jones. 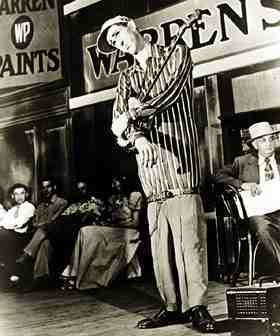 Though he was one of the biggest stars on the Opry throughout the 1950s, it was not until 1960 that he first started making his own solo records. Signed with Starday Records he released a series of albums, including OLD TIME BANJO PICKIN’ AND SINGIN’ and SALUTE TO UNCLE DAVE MACON. His old-time frailing banjo style was out-moded even at that time, but he also recorded for the Nugget and Culman labels. His fame as a comedian suddenly became more widespread when he became a regular cast member of television’s Hee Haw series in 1968. His laconic wit and slapstick humour proved highly popular, and along with other show regulars Grandpa Jones, Junior Samples and Archie Campbell, he helped to bring country cornball humour back into fashion. Like many of the old-time hillbilly performers, Stringbean did not trust banks, and always insisted on being paid in cash. Rumours were rife that he had thousands of dollars stashed away in his Nashville home. He and his wife, Estelle, were brutally murdered on November 10, 1973 on returning home from The Opry and discovering burglars ransacking their house. Sam Bush recorded The Ballad of Stringbean and Estelle, which tells the story of their murder, on his 2009 album, CIRCLES AROUND ME, otherwise Stringbean has been more-or-less forgotten and overlooked by today’s country music.