They don’t come nicer than Steve Wariner. And that’s the problem. But despite calling his new album NO MORE MR. NICE GUY, Alan Cackett discovers that Nashville’s favourite guitarist and resident ‘young veteran’ has come to terms with his affable image.

He's a nice guy, plays great guitar, is one of the most gifted singers in country music and he writes most of his hit songs. But he’s not controversial, so he tends to get overlooked. It’s a problem that he readily accepts, but he sees no reason to change. Steve Wariner has coped with being perceived as the all-American nice guy for longer than he can remember. He should have picked up numerous awards over the years, but his affable persona and sheer consistency have been taken for granted in the country music business. His career closely resembles Vince Gill’s, except Wariner’s still waiting for the superstar status that his rich talent deserves.

“I’ve got to the point now where I’ve decided not to worry about it,” says the smiling singer, settling back in a seat on his luxury tour bus. “It did bother me for a long time, because I had—and I can say this honestly—some good records out that should have done more than they did. But I’m making money and my family’s secure, so I can’t feel bitter about it.”

Wariner is currently promoting his latest album, NO MORE MR. NICE GUY, the 16th of his durable career and his first instrumental set. An accomplished magician, keen basketball and b 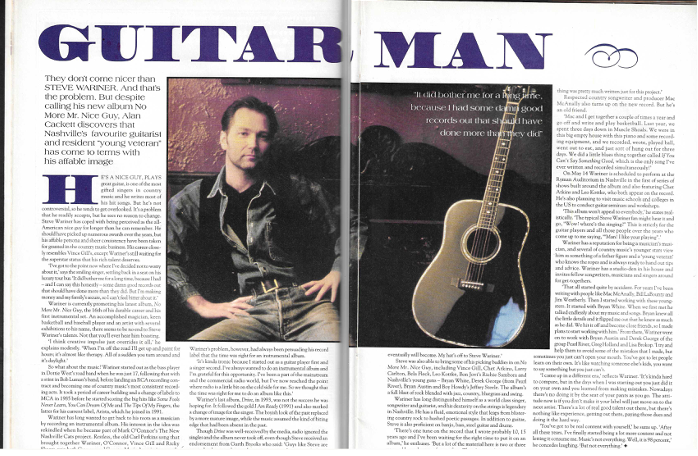 aseball player and an artist with several exhibitions to his name, there seems no end to Steve Wariner’s talents. Not that you’ll ever hear him boasting.

“I think creative impulse just overrides it all,” he explains modestly. “When I’m off the road I’ll get up and paint for hours; it’s almost like therapy. All of a sudden you turn around and it’s daylight.”

So what about the music? Wariner started out as the bass player in Dottie West’s road band when he was just 17, following that with a stint in Bob Luman's band, before landing an RCA recording contract and becoming one of country music’s most consistent recording acts. It took a period of career building and a change of labels to MCA in 1985 before he started scoring the big hits like Some Fools Never Learn, You Can Dream Of Me and The Tips Of My Fingers, the latter for his current label, Arista, which he joined in 1991.

Wariner has long wanted to get back to his roots as a musician by recording an instrumental album. His interest in the idea was rekindled when he became part of Mark O’Connor’s The New Nashville Cats project. Restless, the old Carl Perkins song that brought together Wariner, O’Connor, Vince Gill and Ricky Skaggs, won both Grammy and Country Music Association awards. Wariner’s problem, however, had always been persuading his record label that the time was right for an instrumental album.

“It’s kind of ironic because I started as a guitar player first and a singer second. I've always wanted to do an instrumental album and I’m grateful for this opportunity. I've been part of a mainstream and the commercial radio world, but I’ve now reached the point where radio is a little bit on the cold side for me. So we thought that the time was right for me to do an album like this.”

Wariner’s last album, DRIVE, in 1993, was not the success he was hoping for. It followed the gold I Am Ready (1991) and also marked a change of image for the singer. The boyish look of the past replaced by a more mature image, while the music assumed the kind of biting edge that had been absent in the past.

Though DRIVE was well-received by the media, radio ignored the singles and the album never took off, even though Steve received an endorsement from Garth Brooks who said:   “Guys like Steve are gonna be the ones that made country music what it is and what it eventually will become. My hat’s off to Steve Wariner.”

Wariner has long distinguished himself as a world class singer, songwriter and guitarist, and his dexterity on the strings is legendary in Nashville. He has a fluid, emotional style that leaps from blistering country music to hushed poetic passages. In addition to guitar, Steve is also proficient on banjo, bass, steel guitar and the drums.

“There’s one tune on the record that I wrote probably 10, 15 years ago and I’ve been waiting for the right time to put it on an album,” he enthuses. “But a lot of the material here is two or three years old, maybe even four or five. There's a couple I wrote with Randy Goodrum, a great songwriter, which are fairly new, but everything was pretty much written just for this project.”

Respected country songwriter and producer Mac McAnally also turns up on the new record. But he’s an old friend.

“Mac and I get together a couple of times a year and go off and write and play basketball. Last year, we spent three days down in Music Shoals. We were in this big empty house with this piano and some recording equipment, and we recorded, wrote, played ball, went out to eat, and sort of hung out for three days. We did a little blues thing together called If You Can’t Say Something Good, which is the only song I’ve ever written and recorded simultaneously!”

On May 14 Wariner is scheduled to perform at the Ryman Auditorium in Nashville in the first of a series of shows built around the album and also featuring Chet Atkins and Leo Kottke, who both appear on the record. He’s also planning to visit music schools and colleges in the US to conduct guitar seminars and workshops.

“This album won’t appeal to everyone,” he states realistically. “The typical Steve Wariner fan might hear it and go, ‘Wow! Where’s the singing?’ This is strictly for guitar players and all those people over the years who come up to me saying, ‘Man! I like your playing.’.”

Wariner has a reputation for being a musician’s musician, and several of country music’s younger stars view him as something of a father figure and a ‘young veteran’ who knows the ropes and is always ready to hand out tips and advice. Wariner has a studio-den in his house and invites fellow songwriters, musicians, and singers around for get-togethers.

“That all started quite by accident. For years I’ve been writing with people like Mac McAnally, Bill LaBounty and Jim Weatherly. Then I started working with these youngsters. It started with Bryan White. When we first met he talked endlessly about my music and songs. Bryan knew all the little details and it flipped me out that he knew as much as he did. We hit it off and became close friends, so I made plans to start working with him.” From there, Wariner went on to work with Bryan Austin and Derek George of the group Pearl River, Greg Holland and Lisa Brokop. “I try and help them to avoid some of the mistakes that I made, but sometimes you can’t just open your mouth. You’ve got to let people learn on their own. It’s like watching someone else’s kids, you want to say something but you just can’t.”

“I came up in a different era,” reflect Wariner. “It’s kinda hard to compare, but in the days when I was starting out you just did it on your own and you learned from your mistakes. Nowadays there’s no doing it by the seat of your pants as you go. The attitude now is if you don’t make it your label will just move on to the next artist. There’s a lot of real good talent out there, but there’s nothing like experience, getting out there, playing those dues and doing it the hard way.”

“You’ve got to be real content with yourself,” he sums up. “After all those years, I’ve finally started being a lot more content and not letting it consume me. Music’s not everything. Well, its 98 percent,” he concedes laughing. “but not everything.”