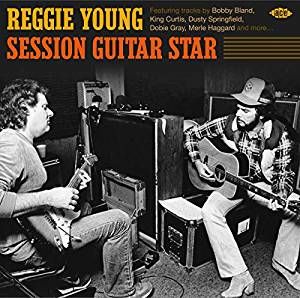 ne of the most recorded session guitarists of all time, passed away in January 2019. He had been working with the people at Ace Records on this superb compilation featuring both classic hits and little-known gems on which Reggie provided his unique guitar work. In total there are 21 tracks, from Reggie’s first session with rockabilly singer Eddie Bond & His Stompers on Slip, Slip, Slidin’ In from 1956 through to Natalie Merchant and Griselda from 2010.  Never constrained by musical styles, Reggie played across the musical spectrum from early rock’n’roll through southern soul, r&b, country, pop, jazz, countrypolitan and gospel fitting into each seamlessly and adding his own distinctive touch to the music.

The highlights for me are Dobie Gray’s original Drift Away from 1973 on which Reggie’s guitar really stands out, Sonny Curtis’ impeccable rendition of Rock’n’Roll (I Gave You The Best Years Of My Life) from the same year and Delbert McClinton’s rollicking Victim Of Life’s Circumstances from 1975. Also worthy of mention is Dusty Springfield’s brooding Don’t Forget About Me, Jackie DeShannon’s sensual I Wanna Roo You and James Carr’s soulful More Love. Other performers featured include Joe Tex, Elvis Presley, Solomon Burke, the Highwaymen, Waylon Jennings and Merle Haggard. The informative 36pp booklet gives full details on all of the recordings with a potted history of Reggie’s career plus some rare photos. Highly recommended.