Two years ago Mervyn Conn made the mistake of putting Marty Robbins on at this venue a matter of days after his Wembley appearance. The same happened again this year and the addition of Don Everly to the bill failed to fill more than half of the large Hammersmith Odeon.

It was a cold evening and those who braved the elements were looking for entertainment. This they got from Marty Robbins and The Duffy Brothers, but sadly the other three acts failed miserably to ignite the audience. Liverpool-based West Virginia, who won the Marlboro Talent Contest, opened the show and demonstrated just why they won. Their performance of Jimmy Buffet’s Come Monday and Rodney Crowell’s Rachel were polished and tightly played. Given time, I feel that this five-piece could evolve into one of our top bands.

The Duffy Brothers took to the stage next and in less than five minutes had the audience in the palm of their hands. Ray and Leo’s mixture of comedy and bluegrass is very effective. They are both exceptional musicians, playing banjo, fiddle, mandolin and guitar. Many artists in this field of music make the mistake of concentrating exclusively on hammering out the tunes as hard and fast as possible, with no let-up or tempering, with the result that it all becomes like an inhuman machine, which quickly becomes boring. With bluegrass standards like Crying My Heart Out Over You and Orange Blossom Special they had the suburban London audience well and truly won over, but all too soon the alarm bell went and their time was up.

Barbary Coast, with the temporary addition of Albert Lee, backed up Don Everly who went through a lucklustre set that included too many Everly oldies and not enough light and shade in choice of numbers. He obviously had a rehearsed set with the band and could not change in an attempt to win over an indifferent audience. But even chat between numbers failed to project any personality.

I was pleasantly surprised at how ‘country’ he sounded. The old hits like Walk Right Back, So Sad and All I Have To Do Is Dream were pure country and his newer material, notably Brother Jukebox and Yesterday Just Passed My Way Again were also closer to country than you might imagine.

It was Marty Robbins who the fans had come to see, and yet he didn’t disappoint. He ran through his old hits, added a few new ones and really delighted the audience with his antics during an act that lasted at least eighty minutes.

Here was Marty in excellent form with some impromptu requests that resulted in some songs like The Blues Country Style and Oh Virginia being performed to just his own guitar accompaniment. He brought forward some of his newer material including his latest British single, To Get To You, his own self-penned  Don’t Let Me Touch You and the atmospheric El Paso City.

He played piano (as well as a game of hide-and-seek with the spotlight man) and ran through Big Boss Man, Begging To You, My Woman, My Woman, My Wife and surprisingly, Among My Souvenirs. It was an excellent musical lesson in Robbins’ ability to take a well-worn song and infuse it with new life solely with the talents of his voice. It illustrated the quality that truly great vocalists have of welding material in their own image and left little doubt that Robbins is definitely such an artist.

He was enjoying himself and easily over-ran his allotted time causing problems off-stage as they were tying to get him to finish half-way through El Paso. He was having none of that and finished the song amidst a lot of finger wagging, sending his fans out into the cold English spring warm, happy and thoroughly entertained. 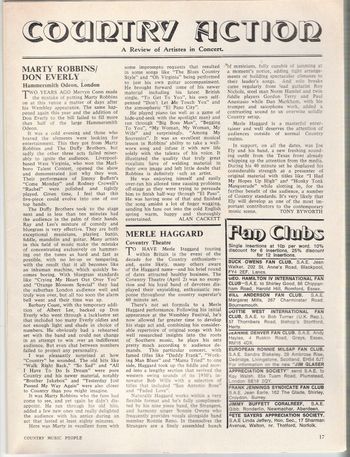