Newcomer Larry Fleet is a truly exciting prospect in a time where country's mainstream influence is continually waning. Maybe 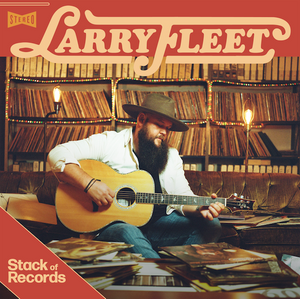 this guy is just the kind of kick in the teeth country music needs every few years. Raised on classic country, southern soul, r&b, bluegrass and rock, Larry is a modern honky-tonker that avoids all the bro country clichés that marred the mainstream a few years back. His schooling is firmly grounded in Hank Williams (senior and junior), Willie Nelson, Bill Monroe, Merle and Buck, Ol’ Waylon and the 1990s country mainstream of Mark Chestnutt, Alan Jackson and Brooks & Dunn as he honours the south's hard-rocking musical traditions and adds a high voltage boost. His lyrics and vocals—straddling the line between outlaw country and southern rock with a twist of soul—are intensely visual in a cinematic sense. If there’s one lesson to take away from this second album, it’s the importance of getting back to basics. Musically, this is the kind of barroom meat-and-potatoes heartland country that launched Waylon Jennings, Billy Joe Shaver, David Allan Coe, Steve Earle, Jamey Johnson and Chris Stapleton’s careers and that seems to be in short supply lately. Fasten your seat belt for a consistently satisfying ride that incorporates lots of stylistic twists and turns. It’s not just the music, though—Larry’s songs of small-town life, family values, hopefulness, loss, desperation and redemption are the balm that we need in the midst of today’s unsettling world.

While STACK OF RECORDS has many familiar elements—simple three-chord melodies, economically phrased truth, and a raspy voice—Larry and producer Joey Moi guide the listener on a carefully crafted journey. The album’s opening title song is a slow burner that feels like a bold choice as an intro to an album that reflectively paints a portrait of his musical influences and says more about Larry Fleet than any words that I might conjure up. From that one song I immediately warmed to the Tennessee-born singer, but there was more to come, much more as he offers a further Baker’s dozen of incredibly musically energetic and poignantly written tracks. I’m not a particularly religious person, but I found his highly successful single Where I Found God, an emotional and somewhat comforting revelation. His rich soulful voice is perfectly suited for this tender ballad about a man who sees God in every corner of his life, voiced in plain, simple and honest tones. There’s also a religious slant to Church Parking Lot, an acoustic-driven toe-tapper with his musical vision at its best—using specific details to evoke a cherished way of life—the joys of family time at a Sunday morning church service, first sip of whiskey, first kiss and break-ups, all in that ol’ parking lot.

It is almost impossible to avoid bopping and swaying to this album, especially with songs like Quittin’ Ain’t Workin’ a strident break-up song sporting a pretty powerful mix of good ol' boy sensitivity, arena-sized sonics with some of the best Southern rock grooves. Highway Feet, featuring Jamey Johnson and Bryan Sutton, is a kind of Appalachian-jig truckin’ tune that could dance the devil into the ground, or the preceding One For The Road, a foot-tapping restless blend of country, bluegrass and rock grooves. Listening to the sheer spirit behind his singing, though, it almost seems silly to confine this guy to the boundaries of one genre or the other. More highlights of the album include Three Chords And A Lie, a good ole pitiful heartbreak number that’s just full of lonesome blues and regret. Once bitten, twice shy, he offers the deep soul of Never Wanna Meet Another Woman, a heart-wrenching slice of Muscle Shoals with hints of Al Green to showcase this guy’s versatility. Then he turns back down an old country dirt road for Heart On My Sleeve, in which Joey Moi treats the optimistically reflective song with a velvet-glove touch, smoothing down the rough edges but keeping the rust on display.

STACK OF RECORDS offers a glimpse of a singer-songwriter with a strong country sensibility and a skill for melding it with contemporary music in ways that should prove amenable to many. This is the kind of refreshing country music you didn’t even know your life was thirsty for. With his properly righteous vibe powering the proceedings, Larry Fleet has some winning ways already on display and this set sure does serve up a bunch of classics; you’re simply spoilt for choice. The music is here in all its glory, and that's what matters. Thoroughly recommended, this young man has a very long and promising career ahead of him!