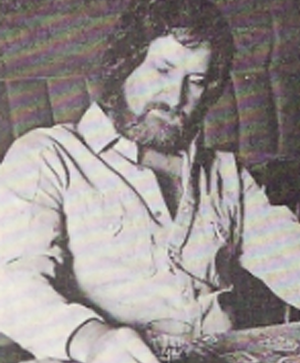 Joe Stampley is one of the newer country singers who came to Nashville via a grounding in rock’n’roll. In a way, his musical tastes appear to have gone full circle. He grew up in Springhill, Louisiana, a small town full of farm people, who still retain the same love for country music as their fathers did, but now favour the more sophisticated Nashville style.

He grew up on a diet of country music provided by artists like Hank Williams, Webb Pierce and Carl Smith. Then there followed the influence of rock’n’roll, with country oriented singers like Jerry Lee Lewis and The Everly Brothers providing the beat, and finally it was the sound of the British and American beat groups of the mid-1960s who borrowed heavily from rhythm and blues and soul music for their stylings.

Joe Stampley, like so many of Nashville’s newer stars, picked up a little from all of these influences and evolved a sound of his own that runs the full gamut from the western swing of Texas, through the heartache lyrics of Hank Williams, to the bar-room sagas of George Jones and the rocking beat of Jerry Lee Lewis.

Throughout the 1960s Joe led a pop group called The Uniques. They enjoyed a fair degree of success, hitting the American pop charts with Not Long Ago, Will You Still Love Me Tomorrow and All These Things. Throughout the group’s existence Joe provided them with song material, which led to a songwriter’s contract with Al Gallico Music. It seemed that Joe Stampley had everything going for him, so why should he want to leave a group at the height of its popularity? Why, after struggling for years, would he decide to pursue a solo career, just when the group had reached national prominence?

It would appear that Joe was becoming disillusioned with the way the pop world was turning, and so it was time to return to his country roots. It was a gamble to turn his back on a lucrative career and aim his music at an entirely different audience, but Joe Stampley rapidly proved himself a talented and very forceful country vocalist.
He recorded some songs aimed at the country market whilst still fulfilling commitments with the Uniques. Quonette McGraw (From Smack-water, Arkansas), his first country record released by Dot failed to make any impression, but Take Time To Love Her, released in November 1970, reached the bottom rungs of the country charts and Joe Stampley has never looked back.

The next five years saw him notch up an impressive list of successes for Dot including Soul Man, Cry Like A Baby, Take Me Home To Somewhere and If You Touch Me (You’ve Got To Love Me). His producer, Norro Wilson, collaborated both with Stampley and Carmol Taylor in writing much of the song material the good looking young singer has recorded.

Together they have produced a rather hybrid sort of sound, aiming at a smooth soul feel, but with the right qualifications to stay in the country music market. His sounds carry all the country instrumentation, but it’s backed by rock beats and touches of white soul singing. It is not a style that has caught on with British country fans, so Joe is likely to face problems in establishing himself this side of the Atlantic.

The early months of 1975 saw Joe Stampley change labels, moving across to the Epic label, where in the last four years he has consolidated his position as one of the most consistent hit makers on the Nashville scene. Norro Wilson has continued to work as producer and there’s no doubt that the two have come up with a good working relationship in the studio.

Roll On Big Mama was Joe’s initial success for his new label and he has continued to hit the charts, alternating up-tempo material like Billy Get Me A Woman, Everyday I Have To Cry Some and Saturday Nite Dance with some fine ballads including She’s Helping Me Get Over Losing You, There She Goes Again and Red Wine And Blue Memories.

Joe Stampley is one of the foremost exponents of country-soul. His forte is slow sexy songs, with a Nashville sound band and the overall production swamped with a heavy chorus. It’s a combination that has worked well on albums like TEN SONGS ABOUT HER, SATURDAY NITE DANCE and BILLY GET ME A WOMAN. Mixes of funk and sentiment are hard to come by, but throughout his recordings Joe has proved what can be done in that direction. He can race along over a sturdy rhythm or slow down and put feeling into a melodic number.

He is an individualist and a highly enjoyable entertainer. An old hand at both rock and country, he distils the best of both worlds into his own personal style of music. He deserves to attract a much wider audience in Britain, perhaps his appearance at Wembley later this month will go a long way to achieve that goal, but he will need the support of CBS Records. Can they see the potential of Joe Stampley, and will they be able to exploit that potential? Only time will tell! 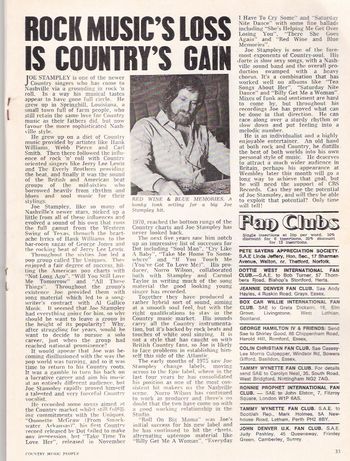