Jess Jocoy - Let There Be No Despair 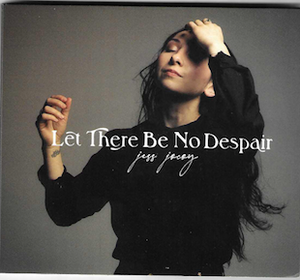 Sometimes an album is more than the sum of its parts, providing a little something extra on top of a good listen and so it is with Jess Jocoy’s new release. A collection of stark, haunting and poignant songs, this is an album about facing one’s fears, anxieties and hopes and it evokes them in their beauty and ugliness with equal parts passion and levelheadedness. But the themes are all too real, and all too current. It’s bleak, to be sure, but it’s a refreshing bit of frankness amid calls for hope and unity that, while admirable, can feel more like magical thinking than meeting the moment. Every album that Jess makes feels like a guidebook on how to live. In the quiet, tense moments when she’s lost in her music, she is wholly herself, awkward and unsure and maybe a little lost, or occasionally more self-assured and accepting of herself. The wrestling with that duality in oneself is deeply felt and explored throughout as she embraces her shortcomings unapologetically—a kind of duality itself. This calibre of gut-punching music doesn’t come along often. You can hear the anxiety and loneliness bending through your speakers, but hopefully that experience serves as a catharsis for so many of us. Jess Jocoy makes the case for listening as a revolutionary act of intimacy, where headphones and vinyl form a psychic connection between the artist and fan.
Her songs have grown impressively dexterous, nimbly hopping from aching verse to pleading chorus. Articulating her misery, she identifies and deconstructs the emotions actualising her mourning for her father in the candid I Will Be Glad. He passed away in 2013 from lung cancer, before he could see his daughter realise her dream of making music a reality. His passing left a gaping hole in her life, but she finds solace and hope in her memories. In turn, the song holds space for the listener to find affinity in sorrow, and perhaps, use her lyrics as the language necessary to describe and understand their own bereavement. The Gardener is a lesson, in its quiet and simple way, in how to give oneself over to changing relationships, shifting landscapes, and the endless cycle of seasons that colour our lives. Her voice is unimaginably strong while also reflecting on a painful break-up.

She finds a way to bolster the cool-toned weariness of her voice with the driving beats and sweeping melody of Jericho Walls. The musical arrangement revolves around the spare strums of her guitar and the sonic echoes of violin, viola and banjo that produce a spacious clarity in which her crystalline poetry can shine.

Weariness infuses the lyrics and melody of Let There Be No Despair, but there’s a glimpse of hope, as well. A chill moment that you don’t realise will ever end, right up until it does. It’s like the deep, calming breaths you take after a long cry and sets the record’s tenacious tone. Wrought with a sensation that’s both resilient and fragile, she offers total commitment in Always, a powerful love song in which she breathlessly utters the lyrics with a fervid passion. The hypnotic Living In A Dying Town, especially benefits from the dramatic echo of cello and the shadow of ghostly harmonies with a nuanced, dark edge that sweeps around and around your headspace.

Jess closes the album with a stark acoustic demo of Common Kindness. Though one of the album’s quietest moments the song acts as an effective catharsis in these trying times as she provides the vocals in as gloomy yet caring a manner as one might imagine. She is tough love; the final gust that pushes the boat over the waves, in an album charged with scenes of contemporary life: love and hope, uncertainty and fear created by society and modern life in general.