Without doubt Jeannie Denver is Britain’s top lady country singer. In little more than four years the diminutive Yorkshire Rose has captured the hearts of country music fans up and down the country with her personal appearances and recordings.

Jeannie was born at Bolton Woods, near Bradford, on October 11, 1945. After completing school she followed most girls of that region into the cotton mills with little thought of a show business career. She enjoyed music and would often go around her home singing. Encouraged by friends and relatives she did become interested in a singing career.

She made her start in the entertainment business singing pop ballads in local clubs and pubs. This was, to begin with, a part-time occupation, but like all budding stars, Jeannie was becoming more involved in her spare time hobby, and necessity demanded she made singing her full-time employment.

It was the music of Kris Kristofferson, and songs like For The Good Times and Help Me Make It Through The Night, which initially fired her inspiration for country. At the time she can recall singing Delta Dawn and thinking of it as another pop tune. With several of the musicians that she worked with around the Yorkshire clubs becoming hooked on country music, Jeannie soon started taking an interest and realised what a great wealth of songs there was available.

Local musicians Allan Holmes and Stewart Barnes (Jeannie’s husband) joined Kelvin Henderson’s Country Band which was based in Bristol and early in 1974 Jeannie joined the line-up as featured girl vocalist. With Kelvin and the band she toured with Slim Whitman during his lengthy tour in the winter of 1974 and had the unenviable task of preceding the star himself.

Although she only had a twelve-minute spot, her personality and stage presence, combined with her magnificent, rich, expressive voice completely won over the audience at every major venue she played and drew praise from critics of many local and national newspapers. A highlight of her act at the time was Jeannie’s Afraid Of The Dark, on which she was joined by Kelvin Henderson. A song made popular by Dolly Parton and Porter Wagoner, Jeannie’s heartfelt rendition transformed the song into her very own personal vehicle, and it has become her most requested stage number.

Within a matter of months Jeannie Denver had become a ‘star’ on the British country scene. But one of the most trying situations for a performer is to attempt to break away from successful past associations in order to establish their own identity. In the spring of 1975 Jeanie decided it was time to establish her own identity.
Rather than resting comfortably in that enviable situation she decided to form her own band, record an album, and take to the road. Her last appearance with Kelvin was at the Wembley Festival that Easter when she had her own short spot and scored a big hit with the audience.

The Jeannie Denver Band took to the road in April and consisted of lead guitarist Stewart Barnes and drummer Allan Holmes from Kelvin Henderson’s Band along with bass guitarist Stephen Hughes, who had previously worked with Jeannie and the other two around the clubs in Yorkshire. To coincide with her new found star status came the release of her first album, YORKSHIRE ROSE on the Westwood label.

Her clean, wholesome looks extend into her musical approach and selection of material. Her straightforward and pure singing gives the appropriate aura to Would You Lay With Me (In A Field Of Stone), making the listener feel as though the tune were being especially for him. Kelvin Henderson joined Jeannie for the moving narration on Jeannie’s Afraid Of The Dark and Dolly Parton is represented as a writer again with Jolene, which Miss Denver handles with ease and emotive feeling.

Throughout the rest of 1975 Jeannie and The J.D Band built up a solid reputation around the country music clubs. When the BBC Radio Two’s Country Club conducted a poll to find out which stars country fans would like to see at Wembley in 1976, Jeannie Denver’s name was high on the list amongst the American artists.

Following another successful tour with Slim Whitman in the early months of 1976, Jeannie appeared at Wembley and her band were asked to back-up several of the American acts. One of these was country-rock singer Carl Perkins. He was so impressed by the guitar work of Stewart Barnes that following the show he presented the young guitarist with his own guitar and case and spoke about him as the best guitar picker he had ever worked with.

That year saw the release of another studio album for Westood and also a ‘live’ album. JEANNIE DENVER AND SLIM PICKENS AT THE SPUR AND SADDLE was made at one of the top country music clubs in Wales. This album gave a fair indication of a Jeannie Denver Show as fiddle player, steel guitarist and comedian Slim Pickens often appears on her shows up and down the country.

During the past 18 months Jeannie Denver has further established herself as a major artist with successful tours of Holland, Germany and Belgium both as a top-of-the-bill artiste and supporting Canadian singer Dick Damron and several American acts like Tony Booth, who have been over to entertain the troops.

Jeannie Denver’s popularity in Britain is due to a combination of elements. A pretty young lady, and what’s more to the point, she has a strong, powerful voice and a distinctive feel for modern country music. Eclectic tastes too, from Melba Montgomery’s Don’t Let The Good Times Fool You to Kristofferson’s Why Me Lord to Jeanne Pruett’s Satin Sheets. Very much interpretative, nevertheless Jeannie lends her own qualities to the material and is given splendid support by a skilled team of musicians known at the J.D. Band.

More impressive has been her stage presentation. She has effectively cast aside her somewhat reserved manner and emerged as a witty, highly professional performer who understands the dynamics of effective presentation. In fact she assumes the starring role with ease. She’s able to adopt different levels of stage personality—from the plaintive ballad singer to the good-time up-tempo performer.

There’s a new depth of maturity in Jeannie Denver. Here is a lady who has her act very much together. With the Band she travels around the country in a modified bus which also acts as their living quarters. Not yet recognised by the major record companies for the potential she possesses to establish country music in the British charts, she is nevertheless well supported by Westwood Records.

This month sees the release of her fourth album for the label, WITH LOVE, another collection of sweet country ballads, up-tempo tunes and gospel songs all given the pleasant and very distinctive Jeannie Denver treatment. 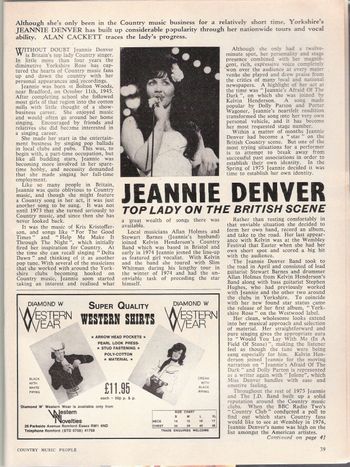 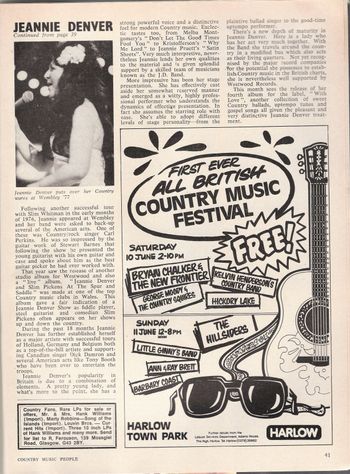