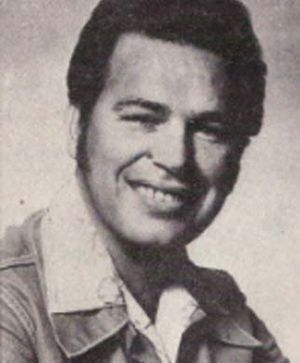 Gene Watson is one of those country singers, well-equipped vocally, who found it a long and difficult task to win any real recognition in America. The climb to the top has been a hard one and thus he’s not a man to be thrown off balance by the recurrence of his name in the charts. The tall Texan is one of Nashville’s new stars with a track record of ten hits on the US Country Charts in the last three years, yet he had been singing country on a semi-professionally basis for fifteen years before he even made it to a major level.

A fully-fledged Texan, Gary Gene Watson was born in Palestine, Texas, but grew up in nearby Paris and has lived for the past fifteen years in Houston. It was in that city that he first established himself as something of a star. He became a regular at the Dynasty club and began his recording career some twelve years ago with The Record Service Club, working alongside Russ Reeder in an association that has taken the pair through a multitude of small labels like Wide World and the Resco Label before finally signing with Capitol in 1975.

Gene speaks highly of Reeder: “I owe a lot of my success to the faith and dedication that Russ Reeder has shown in my career. He helped me when no one else wanted to know and he is still there guiding my career and producing the records.”

The polish and painstaking perfection of his recordings has to be admired. There’s never a rough edge in sight and everything about them is finely crafted and a definite triumph for Watson and producer Reeder. They produced Love In The Hot Afternoon for the Resco label in 1974 and with exposure on radio stations KENR, KIKK and MNUS in Houston it became a sizeable local hit leading eventually to Capitol picking up Gene Watson’s contract and re-releasing the record.

American country fans certainly took Watson to their hearts; the single fairly rocketed to the top of the Country charts and all of the follow-ups have made the top ten. It established Gene Watson as yet another talented Texas performer to make it big in country music, but as he is quick to point out, it’s not really the area you come from, but what you have to offer that counts.

“It’s true that nowadays there’s a lot of country music coming out of Texas. I suppose there always has been. But to me the important thing to my music is not so much where I’m from, as the type of music I do. All I’ve ever been is straight country, and it’s all I ever want to be.”

Heartening words indeed for hardcore country fans. That first major hit, written by Vince Mathews and Kent Westberry, ingrained the Watson philosophy perfectly. A reminiscence of an old love using a somewhat Mexican melody which gets across an authentic feel of the sweet-and-sour memory of something precious that is no longer valued, except in retrospect, it features a haunting steel guitar from Lloyd Green and some magnificent fiddle work from Buddy Spicher.

Watson has maintained a strong association with the basic sounds of country music throughout his recordings. His choice of songs can hardly be faulted, and with his second single he began an association with Ray Griff songs that has given him several chart records and some outstanding album tracks. Again Spicher comes into his own with a sensitive piece of fiddle playing that contrasts nicely with the building chorus of Where Love Begins. It was a sound that took Gene back to the top of the country charts in the autumn of 1975 and led to his first Capitol album, LOVE IN THE HOT AFTERNOON.

It was, on reflection, a good album. Wisely Gene goes for variety, rather than sticking just to the slow, story type ballads that had made him the brightest newcomer of 1975. Included was a rather ordinary reading of Jessi Colter’s For The First Time, and Jackie DeShannon’s bluesy Bad Water was totally unsuitable for the Gene Watson style. Apart from the two singles, there is one track which is an alloyed joy, This Just Ain’t No Good Day For Leavin’ from the pen of Dallas Frazier.

First of all, it has this excellent chorus. Not one that knocks you flat and steamrollers over you, but one that quietly drifts into your head and subtly coaxes you to hum along. A third single from the album, You Could Know As Much About A Stranger, consolidated Gene Watson’s position in the charts and led to the singer turning to a full-time involvement in country music.

This was not an easy decision for a family man in his mid-thirties to make, but the last three years have proved conclusively that it was the right choice. Trying to combine a day-time job as a car mechanic and body repair man with a blossoming and eventually, highly successful singing career, was not easy, but Gene Watson stuck to it. It was probably harder on Gene’s family than the singer himself, but he has a strong loyalty to his family life that comes from seventeen years of happy marriage.

“My family is as important to me as my career. Without the support and encouragement of my wife I would never have made it to where I am today,” Gene adds, almost as an after-thought, “Also I have two great kids, and they are tickled that their dad is a famous singer.”

It was only in the spring of 1977 that Gene Watson first came to the notice of British record buyers. His third album for Capitol, PAPER ROSIE, gained a British release and brought forth glowing reviews and the all-important thumbs-up from British country fans.

The title song, written by Canadian Dallas Harms, deservedly took Gene Watson back to the top of the country charts and established Harms as one of the top new writers in country music. It is a superb tear-jerker story with a simple chorus and lyrics that get right to the heart of the listener. More mellow and convincing than ever, Watson produced an excellent album that effectively displayed his country style. The smooth production from Russ Reeder utilised more delicate instrumentation and vocalising than on his previous LPs.

The blend resulted in a strong record that really established Watson as one of the best true country singers around. The guitar work—almost casual—embraces and smoothes Watson’s hard country voice. Virtually every song is about broken romance, happy memories of the past, leaving or some other depressing subject. Just to give a listen to Gene’s interpretation of Ray Griff’s If The Shoe Fits Wear It to sample his great artistry.

It’s significant that Watson can take songs like that, plus the emotive Marty Robbins’ speciality You Gave Me A Mountain and claim them as his own. That’s presumably because his style is so strong with his singing so individual that it transcends all other versions of the same song.

When discussing the career of Gene Watson you cannot help but bring Canadian songwriter Dallas Harms into the picture. Although Watson and Harms have never met, they both owe each other a tremendous debt. So far Gene Watson has scored with three of the Canadian’s songs. The aforementioned Paper Rosie, The Old Man And His Horn and just recently with Cowboys Don’t Get Lucky All The Time.

“It was Frank Jones who brought Paper Rosie to my attention. It had been a big hit for the writer Dallas Harms in 1975 and as soon as I heard it I knew it was a winner. We even went straight in and named the album PAPER ROSIE before the single was released,” explained Gene Watson.

Dallas Harms had been struggling on the Canadian country scene for years before he made it a couple of years ago as a recording artist and songwriter. Gene Watson has helped speed up his rise to the top and now many of Nashville’s top stars are requesting his songs. Watson included both The Old Man And His Horn and Cowboys Don’t Get Lucky All the Time on his latest album, BEAUTIFUL COUNTRY.

They are both image-setting songs, which seems to be Harms’ speciality, and Watson interprets them perfectly. There’s little except the new material in this album to differentiate from the past Gene Watson records—and why should there be? The formula is fine, and hit tracks like I Don’t Need A Thing At All and The Old Man And His Horn are augmented with the delightful Raining In Dallas and He Little Thinged Her Out Of My Arms, which was written by Hank Cochran.

The signs are all there that Gene Watson could become as big as Merle Haggard. His one drawback is that he doesn’t write his own material, but his interpretative powers are beyond criticism. The most significant quality about his vocal work is the expressiveness in feeling. All the time he can come across the right song material, then Gene Watson has no problems, as he has proved again and again during the past three years.

Like so many new names on the country music horizon he is suffering from a lack of British releases. So far only the PAPER ROSIE album is available on this side of the Atlantic and Capitol have no plans to release any of Gene’s other fine albums. A great pity, as here is a man with the sound and style to whip up a large British following. But this can only happen if the record company play ball and make his records available. 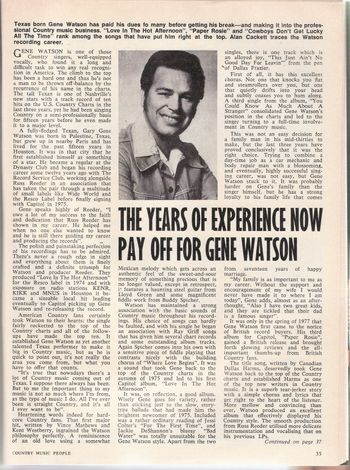 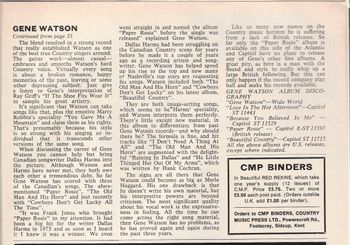