Dottsy is one of the most beautiful singers to have come from Texas. The petite, honey blonde is from Seguin (that’s pronounced Sa-geen), and in a day when good lady singers are at a premium in Nashville, Dottsy is making quite a name for herself.

Alongside Stella Parton, Margo Smith, Janie Fricke and others, she represents new aspirants to the kingdoms of the Dolly Parton’s and the Loretta Lynn’s. There haven’t always been so many challengers. Country music is traditionally a man’s domain, but recent years have seen the gentler sex come to the fore, and Dottsy is certainly a young lady with the talent to become a big name.

She was born on April 6, 1953, her father Harold Brodt is a retired fireman; her mother, Clydie has worked for more than 25 years as a clerk for the Seguin Savings and Loan Company. Her three older sisters, Betty, Barbara and Carla, are married, and she also has a younger sister, Toni. There is a family portrait featuring Dottsy, her mother, her father, sisters and their husbands and children, on the sleeve of Dottsy’s first album, THE SWEETEST THING.

It’s a most apt description of a young lady, who describes herself quite simply as: “. . . a country singer.”. She started entertaining at fire department benefits when she was only 10 years old. Two years later she teamed up with Chuck Grein, the son of one of her father’s co-workers, and together they sang their way into a winning place in a contest sponsored by station KBER in San Antonio. Their prize was an appearance with a country package due to play at the city auditorium. Dottsy and Clark shared the bill with some top Nashville names—Conway Twitty, Ray Price, Bobby Bare, Sonny James and Hank Williams Jr.

Fired by their success, Clark formed a band, called Easy Riders, and Dottsy became the lead singer. The outfit played dances and benefits all around her hometown area and by the time she was 14 years old, the bright, blue-eyed country girl was a regular on San Antonio’s KSAT-TV’s weekly country show. Club appearances, talent shows, variety shows and conventions, all built up the experience that is such essential ground work for all aspiring stars. In 1970, after winning the Seguin Junior Miss contest, Dottsy took the talent prize in the State pageant.

In the summer of 1972, Dottsy made up her mind that what she wanted most of all was a career in music. She had recently enrolled at the University of Texas, where she was studying Special Education. Her plan was to work with mentally retarded children, and she still likes to devote as much of her time, as career commitments will allow, to helping those less fortunate than herself. She is involved in the Texas Association for Retarded Children and helps by appearing at membership drives, fundraising shows and by doing public service announcements for radio and television.

Less than three years after deciding to go all out for a music career, Dottsy had arrived in Nashville, made her first record and watched it climb into the country top 10. It was Happy Shahan, the man responsible for discovering Jonny Rodriguez, who groomed her for a career in country music. Initially she worked at the Almo Village, a tourist attraction in South-West Texas. A couple of tours with Johnny Rodriguez followed, then in March 1975, it was off to Nashville to make some demos.

Roy Dea, a staff producer for RCA, handled the sessions, and was so impressed with the results, that Dottsy was quickly signed to RCA, and her first single, Storms Never Last, proved that his intuition had been right. The song and performance were made for each other, and Dottsy became one of only a handful of stars, who have made the country charts with their very first record.

The all-important follow-up single was I’ll Be Your San Antone Rose, the first-ever song written by Susanna Clark, a fellow Texan, and the wife of Guy Clark, a a very important songwriter. If anything, the song was better suited to Dottsy’s strong, deep Texas vocal tones, and it rapidly soared high on the charts. It seemed that the young lady from Texas with the mischievous smile was to be a big star, then her third single, The Sweetest Thing, failed to make much of an impression.

Just why this song failed is a mystery. Her debut album, carrying the same title, was one of the best from a girl singer in 1976. Full of beautiful songs with a strong country backing, and Dottsy selling them to the listener with supreme skill. The material swings from country to pop, but this talented singer kept the delivery on the country side. Included was John Denver’s Follow Me, a strong version of A Good Love Is Like A Good Song, and my favourite track, We Still Sing Love Songs (Here In Texas).

When her fourth single, Sterling Whipple’s Love Is A Two Way Street also failed to gain a top 20 placing, it appeared that Dottsy was destined to become a Second or Third Division star. Luckily, she has the determination to succeed, her philosophy in life being: “Have patience and determination, and you can make it in anything.”

In the spring of 1977she was once again in the studios, and emerged with (After Sweet Memories) Play Born To Lose Again, a Kent Robbins’ song, that was released in May and finally climbed to the top 10 in August. It was just what the young lady needed, she has since built on that success with Bob McDill’s It Should Have Been Easy, Here In Love (another Kent Robbins’ song), Sue Richards’ I Just Had You On My Mind, and more recently with Waylon Jennings’ Trying To Satisfy You (with Waylon joining in on the chorus).

As Dottsy readily admits: “Entertaining is something I really love to do. I could do it for the rest of my life and be happy!” But she adds: “I’ve found there is a lot more to being a performer than just cutting records and signing autographs. There is travelling, rehearsing, wardrobe fittings, make-up sittings, business meetings and press conferences. It is a fast-paced life, but one which I wouldn’t trade.”

Through all her success, Dottsy is still very much a down-to-earth country girl. “I still have to pinch myself, it all seems like a beautiful dream.” Of course it’s not a dream, because this young lady has worked hard to establish herself on the country music scene. Nowadays natural talent is not enough to gain a foothold on the ladder to success, it takes hard graft, and in typical Texas style, Dottsy has gradually climbed to the top.

She is a unique artist and her forthcoming Wembley visit promises much if the standard is as high as her recordings. To coincide with her visit, a second album is to be released. At the time of writing, it has not been issued in the States and is likely to arrive in Britian before hitting her American fans. Included will be several of her successful singles—Here In Love, Love Is A Two Way Street and It Should Have Been Easy, plus a really beautiful version of the old Hank Locklin classic, Send Me The Pillow That You Dream On.

Dottsy is a bright young singer with a great future in front of her. if handled sensibly by her British record company, there is no reason she shouldn’t become a major star in Britain. The cute, honey blonde has the natural, girl-next-door looks, which British fans go for, and an easily identifiable style which is both pleasant and in keeping with the traditions of country music. Wembley promises a lot for this young lady, and I have a feeling she will emerge as an Easter Queen. 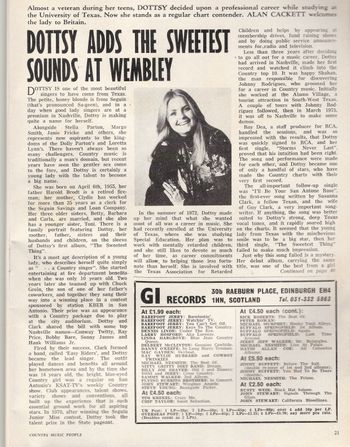 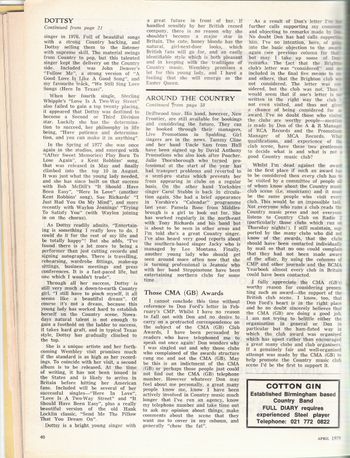