With Burl Ives appearing in the area on the same evening I feared the worst when I arrived at Greenways hotel complex, but the local fans did Dick and Jeannie Denver proud, packing out the hotel lounge and during the event becoming an appreciative and enthusiastic audience.

Ann & Ray Brett, one of our most durable and dependable acts, opened the entertainment, and in their first half-hour spot warmed the audience nicely. Ray did a couple of his own songs, making the most impact with the lovely What More Can I Say, and Ann showed off her strong voice on a fine version of Lonely Street.

Then the JD Band took to the stage, and immediately showed why they are so highly rated. A very together band, led musically by Stewart Barnes lead guitar, but never overshadowed by it. Technically one of the best bands on the scene, but they do not always ‘feel’ country music. This becomes very apparent when Jeannie Denver takes to the stage.

They are transformed into a slick showband, perfectly suited to Jeannie’s material, and a combination that certainly pleases ‘country’ audiences up and down the country. Jeannie’s vocals seemed a little shaky to start with, but before long she settled down to put across a polished and professional act.

She needs to add more new and different material and drop some of the oldies, both to improve her credibility and to make the oldies that are presented more of a special treat: something the audience eagerly anticipates rather than gradually grows tired of. I had the feeling, half-way through her act that I had heard it all before, and it was true I had.

Ann & Ray returned for another short spot that was again well-received by the audience. Simplicity was the key, and there are too few country acts around willing to simply have a good time. Then it was time for Dick Damron to take the stage. Backed up by The JD Band, he launched into Long Green Line, with the band boosting the song with their vocal harmonies.

He performed his best known song, Countrified, near the start of the set, swiftly moving on to prove that he has a lot more fine music in him. To do what Dick did, to hold an audience for an hour or so with a stream of songs, almost exclusively his own—well few entertainers can lay claim to that.

He may not have the greatest voice in the world, or be the most attractive, but there are few who know as much about working an audience. His in-between numbers chat was hilarious, with Mrs. Thatcher being just one person who suffered under his quick-witted comments. His musical ability was ably demonstrated when he switched to banjo and gave out a great version of Foggy Mountain Breakdown and even more bluegrass with Rollin’ In My Sweet Baby’s Arms.

Of his own songs, well the highlights were one after another, because I don’t think that Damron’s ability as a writer has been fully recognised. His ability with words matches that other great Canadian, Gordon Lightfoot, without his style being anything like Lightfoot’s. Waylon’s T-Shirt, Backstage Ladies, Charing Cross Cowboys and Susan Flowers say more about Dick Damron and his music than any words I can conjure up. A great performer, who seems to get better and better every time I see him. 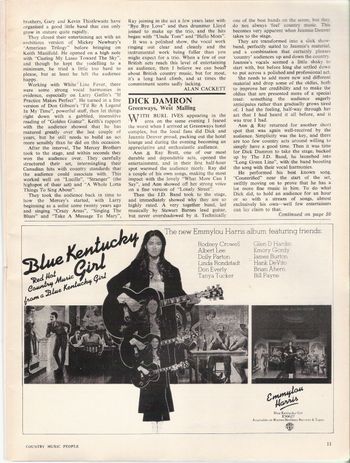 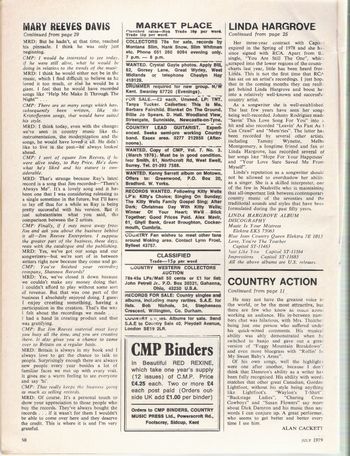