Dallas Harms: Providing the hits for the stars 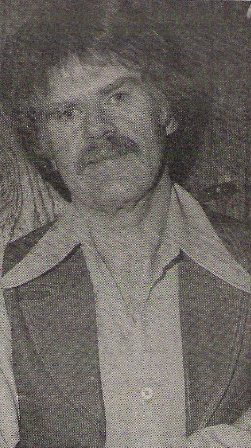 Around 18 months ago Canadian singer-songwriter DALLAS HARMS made his first ever British tour, and if the name wasn’t instantly familiar, the songs were. Now he’s back in Britain—and ALAN CACKETT assesses the man's skills.

Overnight successes in country is rare. Dallas Harms had been singing, writing and performing country music for almost twenty years; all across Canada he had worked, when he finally struck gold in 1976 with successful singles in his homeland and as the writer of three American country hits for Gene Watson.

This month Dallas is engaged on his second British tour. This follows his very successful debut this side of the Atlantic in March 1980, when he played the country clubs and finished with a great performance at the Wembley Country Music Festival. Anyone who has heard some of the songs that Dallas has written, like Paper Rosie, The Old Man And His Horn, and A Violin That Hasn’t Been Played, will know that he is something special in the field of songwriting. What may come as a pleasant surprise is his ability to interpret both his own songs and country standards.

Born in Janzen, Saskatchewan, on July 18, 1935, Dallas moved to Hamilton, Ontario, with his parents and four brothers and sisters when he was only two years old. His father was American and his mother Canadian. They had a farm which had been thriving in the mid-1930s, then came the days of the dust bowls and the whole family was forced to move from the West to Ontario.

Dallas had grown up listening to country music, through the radio and the weekly transmissions of the Grand Ole Opry, and also his mother played guitar and his brother sang country songs. Inspired by listening to his favourite singer, the late Hank Williams, Dallas became involved in country music in 1953 when he first started playing the guitar.

At this time his brother had moved to Buffalo, New York, where he had taken up entertaining in a local club. Dallas would often go over to the States to stay with him and his brother would teach him chords on the guitar and also had him sing with him on stage to give the youngster some experience.

Dallas began playing for dances and Sunday night park shows around Hamilton, which helped in the grooming that has made him one of Canada’s top country music performers of today. He had started writing songs early on in his career, and it was Conway Twitty, back in 1958, who gave him some much needed encouragement.
Conway listened to some of the songs that Dallas had written, and after hearing him sing, he introduced him to Quality Records, one of Canada’s leading record labels. This led to his first recordings that included a self-written song, You Mean The World To Me, which proved to be quite popular.

Since then Dallas has been steadily working, establishing himself throughout Canada. He has recorded for several Canadian labels including Quality, Sparton, Caledon, Columbia and more recently Broadland Records. Through the years he has recorded in Nashville, New York, and Toronto, and through his hobby of building electronic stereo equipment, blended with years of studio experience, he has become one of Canada’s most successful country music producers.

He has appeared on many of the major television shows, including the George Hamilton Show, currently televised by ITV in Britain, The Ronnie Prophet Show, a TV special with Rolf Harris and the Gary Buck Show. He represented Canada in 1972 at the Country Music Association Convention in Nashville and has won numerous awards in Canada for both his songwriting and recordings.

His songs have been recorded by most Canadian country singers over the years. Orval Prophet has recorded songs like Leroy Can’t Go Home, Just A Simple Song and Ol’ Amos; Brent Williams has been successful with Leaving You Is Easier Than Saying Goodbye and I Wish You Were With Me Tonight, and Glen Logan scored with I Might Be In Tulsa For A While.

Dallas is already well established in Canada, and now he is on the threshold of impressing the world (but gently always so gently) with his songs, spirit and voice. It was at the 1976 Big Country Awards, which were held at the Plaza Hotel, Edmonton, Alberta, that things really began to happen for Dallas. He has picked up the award for Single Of The Year for Georgia I’m Cheating On You Tonight (the previous year he had won the same award for Paper Rosie), when he was introduced to Frank Jones, the a&rR man from Capitol Records, Nashville.

During the evening Jones got to hear some of the songs that Dallas had written, including Paper Rosie. He immediately got excited about the song, took it back to Nashville and had trouble in persuading Gene Watson to record it. Paper Rosie became one of Watson’s biggest hits in America and was also the song that introduced the Texan country singer to British country fans.

Watson has since recorded The Old Man And His Horn and Cowboy’s Don’t Get Lucky All The Time, both big-selling singles, and included Mama Sold Roses on his REFLECTIONS album.

This is possibly one of the finest songs that Dallas had ever penned. A simple, sensual tale of a man meeting a lady that he knows is special, this is sincerely told and is one of the highlights of Dallas Harms’ album THE FASTEST GUN, which was named the Best Country Album of 1978 at the annual Big Country Awards.

Containing all self-written songs, this is an interesting assortment of material that prevents monotony. It is a demanding work requiring concentration; the songs are meant to be listened to as foreground entertainment. There is a grim, sad overtone to the album, but if you like to hear superbly written songs of frustration and awareness, this is an album to look out for.

There is a sameness to his voice, which borders on monotony, but this detraction is overcome by the sheer power of the gentleness of his unfettered sound in a natural state of honesty. A fine story line is contained in the beautiful Master Of The Classical Guitar, and in the title tune he shows that he has an understanding of the cowboy idiom. The intensity of the mood softens with the lighter I Picked A Daisy, but the impression of desolation remains in the forlorn agony of Now It’s Crying Time For Me and If I Could Write A Song, which are captured with remarkable despair.

Coinciding with the past tour, THE BEST OF DALLAS HARMS was released by Westwood Records. This album contains the three songs he wrote that Gene Watson scored so successfully with, plus several songs that scored in Canada for Dallas. One of the standouts is Julie, I Think It’s Going To Rain, another superb ballad, and the slightly mid-tempo story-song of Lisa Mae.

His most recent album, PAINTER OF WORDS, is another strong collection of soft songs, including a moving tribute to John Wayne. The Duke proved to be one of the highlights of the first UK tour by Dallas Harms, and is one of the best tributes to the legendary actor I’ve heard.

His writing is full of well-crafted sentimental lyrics that are delivered in a polished manner, utilising a straight country background of steel, fiddle, Dobro, keyboards and various guitars. His personal portraits never get lost in the stickiness of truths still half-hidden. Dallas lays it all out on the line, down to the minutest and most meaningful detail. His is a rare and beautiful gift, and he shares it as perfectly as he wears it.

He writes country songs in the traditional way, lyrics first, music a second, almost secondary ingredient. His songs don't rely on fancy arrangements to get their messages across, which is why he is so highly thought of by country artists like Merle Haggard, Bobby Bare and of course Gene Watson. 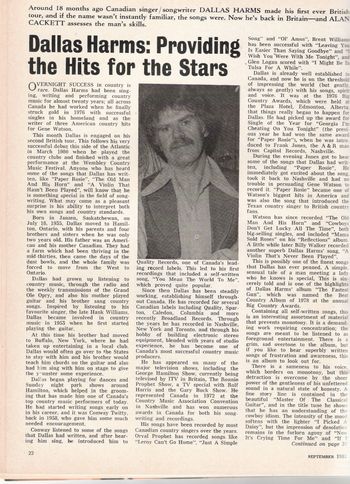 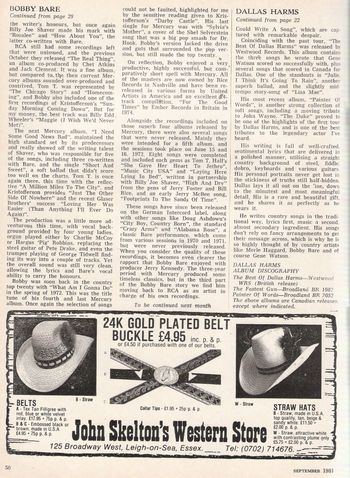