As we arrived at London’s O2, workmen were busily erecting the pop-up stages, there were others preparing the stalls in the Market Square area, the giant posters proclaimed the return of C2C and there was excitement in the air from the multitudes milling around in anticipation of the most exciting weekend in the UK country music calendar. The CMA Songwriters Series, which brings a touch of the famed Bluebird Café to much larger audiences across America, and for the past few years, to London, has become an integral part of C2C. For many, myself included, it is the highlight of the whole event.

Don’t get me wrong, the sheer excitement of seeing full-blown stadium shows by the likes of Eric Church, Miranda Lambert, Dwight Yoakam and Little Big Town is hard to beat, but for someone like me, who savours the emotion and passion of country music, sitting in a smaller venue like the Indigo watching singer-songwriters, armed with just their acoustic guitars, unadorned voices and stories about the songs that they have written, just cannot be eclipsed.

I’ve always been something of a songwriter junkie. For years I bought records as much for the person that had written a particular song as for the act performing it. Even today, the first thing I look at when I get a physical album is to peruse the writer’s credits. I get very annoyed when albums are released lacking these important and vital credits, and it’s one of the reasons I’ve yet to join the millions that are busily streaming or downloading music. Not only is it depriving—no let’s not mince words—cheating the songwriters out of their royalties and the ability to make a living from their craft and art, it’s also ignoring their vital contribution to music.

Tonight’s show featured four writers whose work I’ve been familiar with for many years. Sitting left-to-right on the stage we had host Shane McAnally then Ashley Monroe, Charlie Worsham and Lori McKenna. Sandwiched between Charlie and Lori sat Charles Esten, best-known for portraying Deacon Clayborne in the Nashville TV series. It became plainly obvious as Shane introduced each of the musicians onstage that Charles Esten—or Chip as he said he liked to be known—was the one that the majority appeared to have come to see. 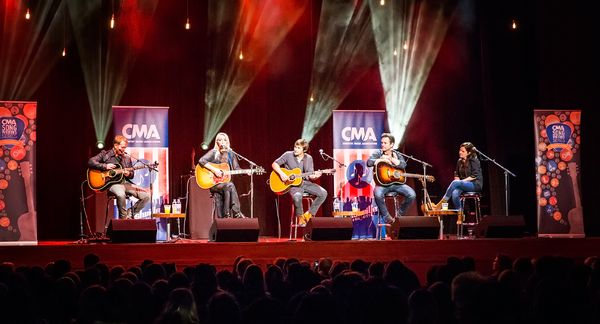 He was given the warmest and loudest reception and after each song that he sung, he received the most enthusiastic applause. Not wishing to be unfair to Chip, but having to be very honest, it has to be said that out of the five writers on stage, his songs were the weakest … that’s not to say that the were bad songs. In fact, I really enjoyed the one about Beer, a clever little number about every male’s favourite tipple and his closing song about how it feels for a performer at the end of a show was uplifting. But when you’re sitting alongside four of the finest Nashville writers, with a slew of major hits between them, it’s a tough comparison.

To his credit, Esten readily acknowledged this and was obviously very humbled to be sitting alongside such masterful writers. He jokingly introduced one of his songs as being due to be recorded by Tim McGraw, then admitted that was unlikely to ever happen … but one can always hope.

Shane McAnally was the perfect host, his audience interaction fun and friendly. Though the writers performed their songs alternately going across the stage from left to right, this is not going to be a song-by-song critique, more an overview of the whole concert. I hate sitting in a show, being distracted by writing notes. I prefer my whole concentration being directed to the stage and listening carefully and fully appreciating the music and the asides of the performers.

The majority of the audience obviously shared my passion for listening intently. What I can never understand, though, is the very small minority, who obviously have ants-in-their-pants. A couple in front of us got up and left the auditorium at least a dozen times, for whatever reasons I cannot imagine, but just wonder why. They were not alone, as many others in my area did the same. Maybe it was because we were sitting in the Press and Media area and when it comes down to it, as I’ve discovered over the years, too many of these ‘people’ are not as passionate about music as I believe they should be. 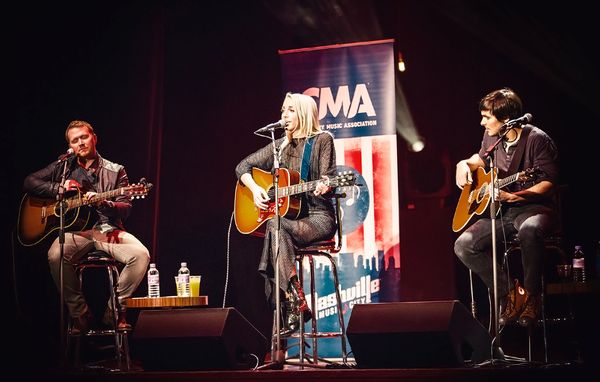 Alongside being a hit songwriter, Shane McAnally is also a renowned producer, guiding recordings for Kacey Musgraves, Sam Hunt, Kelly Clarkson and newcomers Old Dominion. Before he became an in-demand songwriter, Shane had an all-too-brief recording career with Curb Records. He is very much a co-writer and in recent years has worked closely with female artists and it shows in many of the songs he performed this evening. Merry Go Round, Mama’s Broken Heart and Follow Your Arrow are all female-gender songs. Because they were all so familiar to the audience it all worked for him. Especially when he chatted about the inspiration for the songs, most seemingly inspired by his family, especially his mum and sister. During American Kids, he messed up the words, but in an intimate venue such as the Indigo, the flub just added a sense of occasion. It was almost like the audience was let in on a secret. Songwriters who’ve written hundreds of songs, but rarely get to perform them, are likely to have problems remembering all the words.

There was no problem with that for Ashley Monroe, who successfully balances her dual role as both an artist and a songwriter. And what a performer! Raw, intense, each word sung with conviction. Songwriting at its very best... the subdued Like A Rose, was delivered with enormous power, enough to silence the capacity crowd directly. A voice with flexural strength, with a nice tone and just enough southern soul twang to keep it more than interesting, more than convincing. Each song delivered beautifully and sensitively. She herself proved a more than adequate guitarist on her acoustic guitar, but often Charlie Worsham added some extra guitar support knowing how to put the right accents and not outflank her, giving service to the songs and the voice of Ashley Monroe.

Many in the audience whooped and yelled in recognition of The Truth, a number one hit for Jason Aldean and after Shane had delivered his rendition of Mama’s Broken Heart, a massive hit for Miranda Lambert, who should amble onstage but Miranda herself to sing Heart Like Mine with Ashley. Earlier in the evening Ashley demonstrated her wicked sense of humour with the amusing Weed Instead of Roses, a song she co-wrote many years ago with Sally Barris.

Charlie Worsham was a revelation! His many years as a sideman made him the ideal foil for when the others were performing their songs, adding little flourishes here and there and full-blown, bluesy runs when the song called for it. Alongside this, when it came to his turn to perform he completely owned the stage with an easy-going stage patter and killer songs. Most were written from his own life and experiences like the picturesque word portrait of Mississippi In July and the more forlorn heartbreak of Love Don’t Die Easy. We need to see more of this guy in the UK. He’ll be opening for Frankie Ballard this spring and hopefully returning in his own right later in the year. 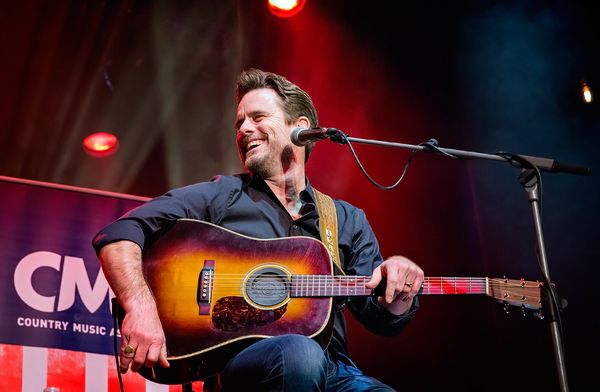 Charles Esten performs during the CMA Songwriters Series Thursday at indigo at The O2 in London. Photo Credit: Anthony D'Angio/CMA

I’d been aware of Lori McKenna since getting a copy of her PIECES OF ME album more than a dozen years ago. At the time, I saw her as a classic singer-songwriter, and a million miles removed from Music Row. Yet, a few years later she made the Nashville connection and over the past few years has co-written on Music Row and had her songs recorded by the likes of Faith Hill, Tim McGraw and Sara Evans. Lori brought her soul to the Indigo. She has lived and that shows in her songs and stories. Stories told to introduce a song come alive in Your Next Lover, which was inspired by her husband’s involuntary wandering eyes and Buy This Town, all about her hometown of Boston. She translated these songs to the stage with economical tight guitar strumming and her powerful performances made the cavernous venue feel like an intimate living room.

Lori had the unenviable task of closing the evening and following Charles Esten’s powerful song about the highs of a performer at the end of a gig, she had her work cut out. Luckily, she had just the right song in Girl Crush. She could easily have lost an audience that was pumped up, especially as she spent time explaining how the song came about, but this lady has spent most of her life treading the boards and read the crowd perfectly. She had each and everyone in the palm of her hand as she delivered this modern classic pop-country song. At the end they all went wild, leading to Shane inviting Lori to lead the audience once more through the chorus. Instead of using the mic to pump it up further, she stepped aside off-mic leaving the audience to sing a cappella in one emotional voice. As she stood side stage listening to this London audience singing ‘her song’ Lori was totally overcome and at the close was near to tears and visibly shaken as Charles Esten, to her left, took her in his arms in a heartfelt congratulatory embrace. It was a fitting end to a fantastic concert. It was the nearest to musical heaven I’m ever likely to experience, and like Lori McKenna, I was quite overcome as my eyes welled-up with tears of joy and emotion running side by side down my cheeks.