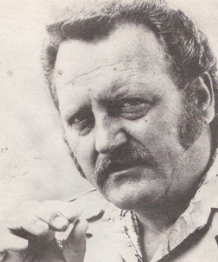 The Nashville songwriter is really only as good as his latest hit song, especially in the eyes of both the record producer and the artist who is looking for material. Luckily, Carmol Taylor has been amongst the most consistent of Nashville’s tunesmiths since he hit Music Row some eight years ago. He has penned a strong catalogue of songs that have kept singers like Joe Stampley, George Jones, David Houston, Tammy Wynette and Jody Miller high on the country charts.

But the Carmol Taylor career has certainly not all been a bed of roses. Born and raised in Alabama, he tried more times than he’d care to remember to make the grade in Nashville. A fugitive from 1950s rock‘n’roll, Carmol is a rockabilly at heart and his initial attempts at songwriting were very much in that vein. His first taste of success at writing a country hit was back in 1965 when Charlie Walker recorded Wild As A Wildcat.

The song was an undistinguished up-tempo effort that scored more because Charlie Walker was on a run of hits, rather than because it was a memorable song. Carmol left a few more of his creations with Tree Publishing in Nashville before returning home, slightly disillusioned with Nashville and almost broke. The publishing company pushed the songs, but apart from a couple of album cuts, Taylor’s songs were destined to gather dust on the shelf somewhere along Music Row.

Carmol returned to his day-time job, his entertaining experiences confined to working in a little club with a rocking combo that concentrated on his up-tempo swingers that Nashville had rejected. He continued to send demos of the songs that he was writing to publishers in Nashville, and eventually Norro Wilson of Al Gallico Music took notice of the songs and suggested that Carmol should come to Nashville so that they could work something out.

Wilson was already established around town both as a singer with several minor hits to his name and as a writer for Tammy Wynette, Barbara Mandrell and David Houston. He worked with Carmol suggesting that a change to ballads would be a better way of achieving success and they rapidly came up with a string of successful songs like He Loves Me All The Way for Tammy Wynette and Your Love’s Been A Long Time Comin’ recorded by more than 20 artists.

Billy Sherrill, famed producer for Tammy Wynette, was suitably impressed by Carmol’s demos of the songs he was writing, and signed him to a recording contract with the Epic label. Four or five singles were released, but nothing happened at all. Carmol was quite contented writing songs, so for a time he gave up any aspirations for stardom and concentrated on writing the hits for the stars.

He’s always been prolific in his output and the results are usually satisfying and occasionally exhilarating. The Grand Tour, a magnificent and moving ballad, is one of Taylor’s finest creations. The picture he paints so vividly of a house seen through the eyes of a husband whose wife and child have left him is masterful. Another gem which I keep returning to is Torn From The Pages Of Life, one of the last major hits by Stonewall Jackson, who now seems to have slipped from favour. But it is the honky-tonk ballads that Carmol Taylor is famed for.

David Wills, who seemed a great find just four years ago, did marvels with There’s A Song On The Jukebox and, of course, Joe Stampley has scored more recently with a string of Carmol Taylor songs like Billy Get Me A Woman, Whisky Talkin’ and You Made Life Easy. It seems in the lyrics of his songs that Taylor gets right into situations that we all take for granted. Years of working the bars and clubs have given him an added insight into the lives of the people who frequent the honky tonks.
But not all of his songs are about the lonely; the failures in life and love are only a part of Carmol Taylor’s songwriting repertoire. He also gets to grips with the happy side of romance, though often colouring it with a little piece of heartache, as in Your Love’s Been A Long Time Comin’, in which true love finally blossoms after a series of false starts. Tammy Wynette’s My Man is a woman’s glowing tribute to her loved one with Miss Wynette adding the saccharine and sweetness to the already tender, touching lyrics.

Most country songwriters like to tackle the story ballad, and Carmol Taylor has written several in this idiom. Papa’s Wagon, one of the few songs he has written by himself takes the listener back to happy childhood memories seen through the eyes of a girl who left home and ended up in the gutter. A real tear-jerker is Jimmy’s Roses, a beautiful song recorded by Jody Miller, fully illustrating Taylor’s ability with a sad country lyric.

In the early months of 1975 Carmol Taylor was back in the studios recording under the guidance of Norro Wilson for Al Gallico productions. Norro was convinced that there was a future for the songwriter as a country singer. Initially, it was planned to make a few hit singles, and the first session produced a great up-tempo version of Wayne Kemp’s I Really Had A Ball Last Night, which was picked up by Elektra Records, who were pleased to see their new artist making the country charts in the summer of 1975.

During the next year Carmol consolidated that success with the self-penned Who Will I Be Loving Now and a countryish version of Chuck Berry’s rocker, Back In The USA. Already established as a top notch country songwriter, Taylor was rapidly advancing his reputation as a fine singer as well. The self-penned Who Will I Be Loving Now was one of the finest country singles of recent years. A slow, soulful ballad featuring distinctive keyboards and steel guitar interchange, it showed that Carmol Taylor was a superb interpreter of a sad country ballad.

With three country hits under his belt in less than a year, the summer of 1976 saw the release of Carmol Taylor’s first, and to date, only LP. SONGWRITER (Elektra 7E 1069) was an album I approached with misgivings and trepidation. I needn’t have worried. It’s a fine debut long player.

All too many successful songwriters turn to recordings with disastrous results, but Carmol Taylor proved himself an exception to the rule. Terrifically varied, the album switches from soft ballads to country-rock featuring fine tunes and real care in production. Justice is done to Chuck Berry’s Back In The USA and Wayne Kemp’s I Really Had A Ball Last Night, with neat piano work by ‘Pig’ Robbins, again showing his ability to bring out the best in the musicians he works with, as the Nashville sidemen really play well throughout this album.

Surprisingly Taylor only wrote seven of the 10 songs, but they all succeed in spotlighting his writing talents. From the up-tempo You’re Looking At A Happy Man to the slower Love What’s Left Of Me, he has his craft firmly under control. His music is a blend of honky-tonk and boogie; good time stuff with an infectious enthusiasm, which leaps out of the speakers. It’s a style which suits him well, and his Play The Saddest Song On The Jukebox is powerful.

Carmol Taylor made the lower reaches of the country charts again in the autumn of 1976 with the self-penned, up-tempo, novelty song, That Little Difference, but since then he seems to have faded a little as a recording artist. A duet with Stella Parton on Neon Women released just before Christmas of the same year, failed to make the grade during the early months of 1977 and his only other single I’ve heard since, What Would I Do Then appears to have been another flop.

It would be an injustice if Carmol was to slip out of the limelight as a recording artist as his SONGWRITER album certainly hinted at a great new country singer blossoming forth. 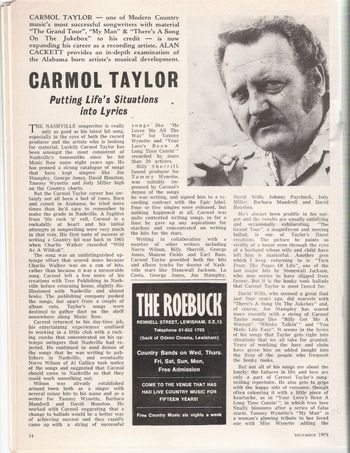 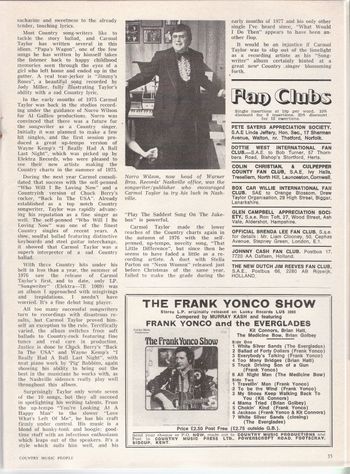