Hank Wangford & The Lost Cowboys - Save Me The Waltz 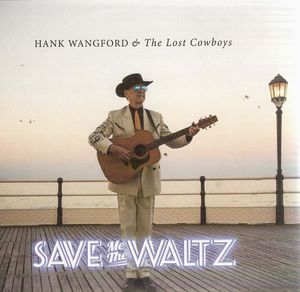 I remember with acute embarrassment my first feeble attempts at the waltz. It was at the tender age of 16 or 17, when I was dragged along to a local dance school by my girlfriend to ‘learn to dance.’ The tuition was a failure as I struggled to grasp the one-two-three steps to the Blue Danube Waltz and my poor partner ended up with badly bruised toes. Dancing is not my forte, but in the ensuing years I have ungainly smooched in semi-waltz style to such classic country tunes as Amazing Love, Help Me Make It Through The Night and Tennessee Waltz. Country music used to lend itself to waltzes, as good ol’ Hank Wangford and his buddies show with this 2-CD set of mainly waltz tunes, some penned by Hank and others selected from the annals of country music of old. As you might imagine, this is very much subdued music that kinda drifts along at a sedentary tempo.

Some of these are older recordings, whilst a handful have recently been recorded with the current Lost Cowboys line-up, but they all sit comfortably side-by-side making it nigh on impossible to differentiate between them. The CDs are sub-titled ‘The Light’ and ‘The Dark,’ though you’d be hard-pressed to notice any change in light or shade as Hank offers up dark tales of love and heartache, betrayal and death. He sets the mood with an almost whispered rendition of Floyd Tillman’s I Love You So Much It Hurts Me with BJ Cole’s pedal steel almost dueting with him as the song meanders delicately along. This love anthem lulls you into false security as a few minutes later he offers up the desolate break-up of Sunk Without Trace that leads neatly into Willie Nelson’s Permanently Lonely, a full four minutes of depressing heartbreak. Though Hank tackles songs by such well-known tunesmiths as Dallas Frazier, Wayne Kemp, the Louvins, Lennon-McCartney, Lucinda Williams, Gram Parsons and Chris Hillman, he also proves to be a skilled songwriter himself with eleven self-penned songs that are impressive to say the least. Very much a storyteller, the characters in this album are flawed, but real. They include star-crossed lovers, lonely hearts left behind and unlikely couples brought together by circumstance and torn apart by design, and, ultimately, makes us feel happy that our lives are as good as they are.
He puts his passionate voice front and centre with generally sparse arrangements that allow the lyrics to live and breathe. But his voice is more than just passionate—he totally inhabits the characters in the lyrics of these songs. He is more interested in setting subdued scenes and letting listeners do the rest … he makes lucid use of accompanying instruments, using acoustic guitar, pedal steel, subdued electric lead, fiddle, subtle drums and bass and the occasional harmony vocals of Anna Robinson for little more than ambience. All he needs is a melody and a heartbreaking metaphor or two, and he’ll break it down like a grateful survivor—not a bad thing to be. Hank Wangford proves that melancholy is not just for gloomy winter months, even if this wonderful music may make you long for those when listening to it. Which I very strongly encourage you to do. And enjoy …